New 8000 and 10000 watt inverters by AIMS Power are less than half the size and weight of any other available on the market today, respectively. 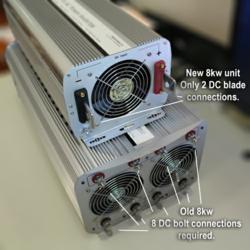 “We sold a lot of the old models, but they were so big that our customers would basically have to create another compartment outside their power room in order to make it fit,” manager of theinverterstore.com, Michael Shepherd

Two products in high demand — the 8000 and 10000 watt 12 volt inverters by AIMS Power — have been rethought to meet industry needs with a more compact, user-friendly design.

The body of AIMS Power’s new 8000 watt 12 volt inverter is half the weight of the old, 21 pounds as opposed to 42, and its frame is also half the size, which makes it applicable to a more diverse range of jobs.

The new 10000 watt inverter is also two times lighter and smaller than any other inverter in its class available for sale online or in stores today.

“We sold a lot of the old models, but they were so big that our customers would basically have to create another compartment outside their power room in order to make it fit,” manager of theinverterstore.com, Michael Shepherd said. “We will no longer carry the old version because this one is just better in every way for our customers.”

Other upgrades include: 1, a redesign of the inverters’ ac outlets, which were converted from a cluster to a strip layout to improve functionality when using abnormally shaped plugs; 2, an improved terminal block, which ensures that the inverters put out the max power promised (8000 and 10000 watts); 3, DC inputs that are simplified to one positive and negative, rather than four of each, making for an easier install; and 4, a single fan system, as opposed to a dual, which makes the inverters much more quiet during use and still performs the cooling duty just as well.

Another big advantage to these high powered inverters is the capability to run them off of most vehicles’ standard power systems at 12 volts. This is uncommon amongst inverters with wattage capacities above 8000, making these inverters attractive to mobile business owners or businesses that need reliable mobile power where it otherwise wouldn’t be available.

These inverters’ high wattage output with low voltage input can save money if planning on using the inverters to power an air compressor on a fleet of construction vehicles, for example, because the business owner wouldn’t need to upgrade any truck’s standard 12 volt power system to 24 or 48 volts in order to power the inverter.

The demand for cleaner, more efficient and quieter inverters for mobile and off-grid power systems is constantly growing. AIMS Power inverters have evolved along with the industry since the company started in 2001 to meet commercial, industrial and consumer needs for more dependable power inverters. As with this year alone, the company has introduced 10 new products including the 8000 and 10000 watt.

This inverter evolution has allowed AIMS Power to become a multimillion dollar enterprise with worldwide reach and influence within the market.

AIMS Power has become a multimillion dollar company because of commitment to the inverter industry. Inverters will be sold worldwide regardless, but innovation combined with excellent customer service separates AIMS Power from the competition. Buying an inverter is almost never a cut-and-dry process so AIMS Power prides itself on being the most accessible company in the inverter industry when it comes to technical support and providing quality information to our customers via AIMS Power’s communication platforms. Inverter users call and e-mail AIMS Power’s technical support and customer service teams daily from all over the world with issues ranging from aftermarket boat upgrades to backup power systems during hurricane season, and they always reach a real person with a real commitment to solving their problem — no matter how big or small. To contact the AIMS Power Inc., simply call (775)359-6703 or e-mail them at sales(at)AIMScorp(dot)net. Like us at Facebook.com/AIMSpowerInverters and follow us on Twitter @AIMSpower for more inverter information and AIMS Power promotions.