Recorded during a far ranging psychick journey, the new album from US Industrial Black Metal entity, Choronzon, far outstrips past accomplishments. Elements of ritual, classical orchestration and a very visual sense of musical color characterize this documentation of a deeply felt spiritual journey.

(PRWEB) The gathering at the last event ever at Orlando's experimental Garp Gallery on Church street in October were the first to be treated with a live preview of the new music of P. Emerson Williams. The normally boisterous and milling crowd of Central Floridas art scenesters were transfixed and reverently letting themselves be carried away by the shamanic and improvisational performance of Choronzon.

Accoustic performances by Metal musicians are rarely as chaotic and trance-inducing as the swirling and percussive assault launched that night by P. Emerson Williams and Malay sex-god Maynard De La Paz. Displayed were the same experimental melding of ethnic percussion, twisted sound scapes and emotionally unhinged vocal invocations of the music that was being created deep in the caverns of Foamin' South Studios.

Choronzon have always been known as anarchic and occult practtioners of sonic Magickal craft, but past releases were mere previews of this releases harrowing scope. Claustrophobic tunnels of darkness open up into vast churning heavens into which the listeners are thrown.

"Be warned! this record is an aquired taste! For the dark eccentric wierdo inthe metal crowd only." Kurt Hubert, Pit Magazine about Choronzons debut, "Magog Agog". "The industrial edge of this band is the most visual side of their music, several noisy factors do play an essential part of he music and do not allow it to become poloshed or predictable." Nordic Vision Magazine. " A chaos demon has landed on Choronzon recording - that is why it is so sick. Alas never try to stick a label to this cd, otherwise it leaves you dissatisfied. Better get into it with free mind, as it can not be an everyday listen."

Born of need and dark desires no person woiuld like to admit to. 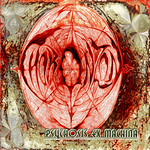