While The Poi Company closed its doors in 2002, the poi website still attracts 35,000 visitors each month. Profits from a new line of poi themed merchandise will keep the research website alive.

The popularity of poi Â the thick, purple pudding that is the main part of the Hawaiian diet Â has been decreasing over the years. Taro and water are the only ingredients in poi. Taro (colocascia esculenta) is grown in an irrigated field, called a lo`i, which resembles a rice paddy. Cultivating taro is back-breaking work and the cost of agricultural land in Hawaii is high. As a result, the few taro farmers that remain are growing older and they are not being replaced by the next generation.

Craig and Marjorie Walsh bought a controlling interest in The Poi Company, Inc. in 1998 with the goal of bringing Poi to the World. Over the next four years they invested almost $3 million in the Company. Their goal was to make poi "cool" again, and introduce its subtle taste and hypoallergenic benefits to new consumers. Poi has the unique advantage of having a creamy "mouth feel" Â but without any fat.

The Company installed a hi-tech Romaco/Koruma mill and introduced many new products: Poi English Muffins, Poi Cheesecake, Poi Biscotti, Poi Ice Cream, Poi Lavosh, Freeze-Dried Poi, Flavored Poi (in convenient squeeze tubes), and even Poi Dog Treats. These were marketed throughout the State of Hawaii, and at trade shows in California, Nevada, and New York. The Company even employed a London-based sales executive to bring poi to the European Union.

While the new products were well received, sales (particularly after 9-11) were not enough to cover overheads. The months of high poi demand, especially June, were times of scarce taro supply. As a result, the Company closed its doors in May of 2002 and turned off its busy e-commerce website, http://www.thepoicompany.com.

Craig realized that students and others used the poi website to do their research on poi and its importance to Hawaiians. He revived the website as http://www.poico.com. It is no longer an e-commerce site, but rather a source of information, poi recipes, nutritional and diet information, and poi trivia. It is viewed by 35,000 visitors each month.

This year, in time for Christmas giving, the poi website has introduced a series of poi-themed gifts. Most feature the Poi Boy image and the "Poi to the World" slogan. Poi t-shirts start at $10.99, posters at $3.99, mugs at $10.99, and even a messenger bag at $20.99. Orders are processed by CafePress.

Profits from the sale of poi merchandise will be used to continue to keep the poi website running. While The Poi Company, Inc. failed in its efforts to bring Poi to the World, perhaps this new website can continue to bring the poi message:

"The bowl of poi was considered so important and sacred a part of daily Hawaiian life that whenever a bowl of poi was uncovered at the family dinner table, it was believed the spirit of Haloa, the ancestor of the Hawaiian people, was present. Because of that, all conflict among family members had to come to an immediate halt. In other words, 'Be Happy. Eat Poi.'" 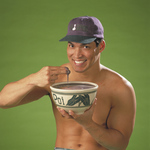 Poi Boy With Bowl of PoiThe Poi Boy eating poi in the traditional manner: with his fingers.