Rare Tahitian piece, claimed by art historians to have 'not survived', may be one of the very first compositions used for a series of Gauguin masterpieces. 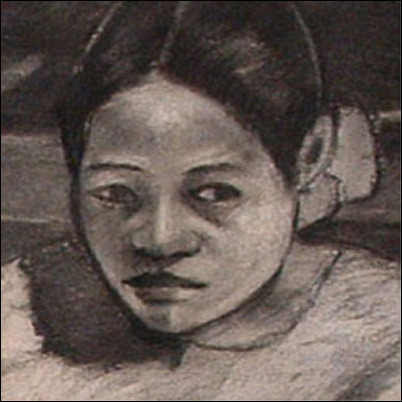 I'm going to give you a glimpse of my paintings. Examine them closely, as well as the wood carvings. You will see they all belong together.

The classic painting ÂTahitian Women on the BeachÂ by French artist Paul Gauguin is one of his first in a series of Tahitian paintings that hang in the MusÃ©e dÂOrsay in Paris. But now a drawing purchased in 2003 claims to be the lost study sketch that the famous 1891 painting was modeled after.

According to ÂThe Art of Paul GauguinÂ from the National Gallery of Art, Washington and the Art Institute of Chicago, page 213, ÂNothing reveals the studio character of GauguinÂs art as much as his making second versions, or 'near-copies' at the same scale - of three of his earliest Tahitian paintings. Although 'documents' for the figures in these particular pictures have not survived, it seems highly likely that Gauguin would have used them, both for the development of his ideas at an initial stage and then later for transfer. The use of working drawings seems to be the only possible explanation for fact that the same model posed for both figures in one of these compositions (cat. 130 )."

This information coupled with the drawing's provenance (history) and the geography, timeline, style, character and storyline, would indicate that the drawing pre-dates the Gauguin painting of 1891.

According to the family, the drawing had been in their possession for four generations. Kept rolled up in a tube or vase and hidden among other stored collections, they told the buyer it was just one of many gifts given to the family matriarch; a midwife married to an island chief at that time and considered on par with royalty.

The notarized sale of the heirloom inspired a hasty lawsuit by other family members and their numerous attorneys to regain custody of the drawing. The legal battle (Case 04-2-001236, Kitsap Superior Court) which was eventually won by the buyer only served to convince the collector that it was indeed the original drawing thought to have 'not survived'.

In contrast to overwhelming documentation and researched evidence supporting the drawing's history, is the vague and inconclusive response from the Wildenstein Institute in Paris, the world authority on Gauguin.

After paying a $1,300 fee to the Institute, they based their decision solely on a single photograph and replied; ÂWe feel that this work must have been inspired by a famous painting which is at the MusÃ©e d'Orsay in Paris. Someone must have seen it and copied it.Â The fine print in their response claims they are not required to explain their criteria for judging authenticity.

Wildenstein did not respond to requests to specifically acknowledge the documents and provenance the owner provided with the drawing. They are not required to explain the its four generation history in the family's possession.

Further, upon closer examination, there are several important differences that make the drawing not a 'copy' at all. This is easily overlooked at first glance.

"I'm going to give you a glimpse of my paintings. Examine them closely, as well as the wood carvings. You will see they all belong together." Paul Gauguin.

Those differences would make the drawing the first in a Gauguin series and a rare Tahitian-period treasure that has eluded discovery for more than one hundred years.

Charcoal sketch of two womenCharcoal drawing found and believed to be the study sketch used as a model for the classic Tahitian period paintings.

Wildenstein's response Sept. 24, 2004"..we feel it must have been inspired by a famous painting by GAUGUIN (n434 of the 1964 Wildenstein Gauguin Catalog) which is at the musÃ©e d'Orsay in Paris : someone must have seen it and copied it but we do not feel that it was Gauguin himself."

Other Gauguin study drawingsDifferent sketches from the same era by Gauguin compared along side the working drawing.

Comparision with other Gauguin's