What began as one woman's weekly e-mail rants to friends and notorious e-mail swappers has swiftly become the hot literary breakout book of the season.

(CollectiveWorks) - The POWER journal - Chronicles of a Revolutionary Black Woman in White America, a new book by author Waset, offers a cross between a hip-hop album and a fiery political commentary. The book delves into controversial topics such as the sagas of R. Kelly and Michael Jackson, the War on Terror, the dilapidation of black music, brothas on the down low and more.

Initially released in mid-2004, the first version of The POWER journal was so successful that The Golden Collectors Edition of the book was released in December 2004. As remarkable as that may appear, what's even more noteworthy is the fact that the book has sold well without the benefit of a national distributor.

Waset recently commented, "Although I contacted every African American bookstore I could find, only a handful of proprietors such as AfrikanSistahsMarketplace.com and African American Images in Chicago were interested in this type of book. I was told that The POWER journal wasn't urban enough to entice readers away from the ghetto fiction that bombards the marketplace. Luckily, I had enough courage to follow my first mind and ignore the people who said there wasn't an audience for a ÂblackfrocentricÂ book that isn't ghetto, yet contains much flava."

Faced with the seemingly insurmountable task of selling sizable volumes of books without a major distributor, Team POWER journal sought out to locate and seduce a target market of individuals who are often ignored by mainstream urban advertising tactics. Armed with a bevy of stellar reviews, the team advertised and sent complimentary copies of the book to sororities, teachers, churchgoers, students, fashionistas, revolutionaries, social outcasts, politicians, and even some famous people. In essence, the team built their own distribution network that has paid off significantly through word of mouth and repeat buyers.

"When I sat down with my marketing team to identify the target audience for The POWER journal, I realized that my core audience consisted of people like me who think BET is a disgrace, think 50 Cent is a sucka, and think that Condoleezza Rice is The Manchurian Candidate," Waset says.

Known by friends and acquaintances as the anti-celebrity, Waset admits that book sales substantially increased once those in the celebrity in-crowd got wind of the journal. Nevertheless, both Waset and her publisher, Golden Ankh Publishing, insist that The POWER journal was created for regular folks who know that there is a difference between can't and Âcaint,Â and for those who know that just because you sell a lot of records certainly does not mean you can sing. Frequently one to rebuke the glitterati of Hollywood even though she calls Los Angeles home, Waset has several music, film and television writing deals under consideration. In addition, she has a new book scheduled for release in late 2005 entitled, FAT, Black and maybe even Ugly - Now What?

Waset also stated: "Its funny when producers call me and ask me about writing urban products. Normally what they mean by urban is ignorant, slapstick and/or ridiculous. What's sad is the fact that many of my black peers suggest that I should go ahead and write some derogatory and stereotypical entertainment for the sake of a good payday. Sorry, I write message-driven material. It can be fiction, but there has got to be some positivism in the story or I won't partake. For me, it has never been about achieving great fame; it is about achieving the POWER required to help build a successful future for black people. I don't push a Maybach or rock a Rolex watch, and for some reason Boyz II Men has not granted me that interview I requested. All the same, as long as I'm happy and true to myself, IÂm cool without the Rolex and the Maybach - but I still want that Boyz II Men interview."

The Power Journal is available now at http://www.waset.net and elite retailers nationally. 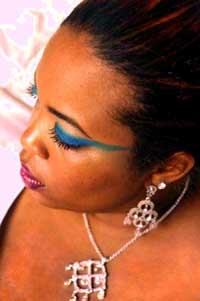 "Author, WASET"WASET, author of The POWER journal - Chronicles of a Revolutionary Black Woman in White America