DJ LEFT is considered to be the Internet mixtape king. He has distributed well over ten thousand mixtapes online alone in a matter of weeks. Left has his mixtapes in his hometown the Bronx and all the way to Africa. Left considers this a much easy way to market him self without trampling over the other 9 million DJÂs trying to get their name out there.

All you have to do is log on to http://www.DJLEFT.com and go to free mixtapes and thatÂs it. He has several mixtapes in circulation (Disco inferno, ItÂs a rap, Got Blends, Times up, Best of Lord Tariq) just to name a few. He has received many accolades for his remix style blends on Got Blends and Got More Blends. Left can also be found on various sites also for free http://www.download.com, http://www.soundclick.com and http://www.whosnextonline.com .

He has ventured into other closely related business. He runs a printing company called http://www.left-field-graphics.com where he creates everything from mixtape covers, web design and even wedding invitations. Left also operates an event promotion website called http://www.getyourpartyon.com where you can promote you parties mixtape and other venues.

He is also working on an album with childhood friend Tommy Danger where he is doing the majority of the productions. DJ Left has also done music production for television. He has produced music for a documentary for Showtime television entitled ÂReflections Of Ground ZeroÂ. The films explore the effects of September 11th through documentaries and narratives; "Reflections Of Ground Zero" examines diverse themes and perspectives including stories of personal tragedy, ordinary heroes, patriotism, religion, New York City and the continued hope for peace. NYU alumnus and noted filmmaker Spike Lee hosted the showcase of ÂReflections from Ground Zero,Â D.J. left is also is also a beat impresario producing tracks for HarlemÂs own Tommy Danger, Bronx born Will Traxx and Lord Tariq. Left has also started his own production company cleverly named ÂI produced hits.Â 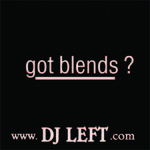 dj left Got blends Get your free mixtape at www.djleft.com