The T. J. Martell Foundation Will Auction Off One-of-a-Kind Collectible Gold and Platinum Records From Leading Recording Artists for Charity

The T. J. Martell Foundation, in conjunction with Ill-Eagle Enterprises, the worldÂ?s leader in the design and production of RIAA-licensed music industry awards, is proud to announce the launch of the Gold and Platinum Charity Auctions for Leukemia, Cancer and AIDS Research. Every month, for ten days, beginning September 12, 2005, music fans and collectors of music memorabilia can bid on eBay for the same one-of-a-kind, framed Platinum and Gold Record Award that are presented to leading recording artists.

Established in 1990, Ill-Eagle Enterprises produces approximately 70% of all framed Gold and Platinum Records Awards presented to the worldÂs leading recording artists and music industry executives, and will produce these exquisite Gold or Platinum Awards for this exclusive eBay auction. The awards that will be auctioned off are going to be from the exact same production-run of awards that will be presented to todayÂs leading recording artists in the very near future in honor of their most recently released major label recordings. This is a very rare chance for both hardcore collectors of music memorabilia and even everyday music fans to own a piece of music history usually only reserved for music industry elite.

Ill-Eagle has worked closely with the T. J. Martell Foundation in providing one-of-a-kind awards for their various charity auctions in the past. According to Darryl Sage, Founder and President of Ill-Eagle Enterprises, ÂWeÂre particularly excited about this auction, as itÂs the first time Ill-Eagle has participated in providing as many as 20 to 25 awards for a weekÂs worth of eBay charity auctions. Anticipation is running very high for a very successful campaign that is expected to bring in a significant amount of research money for the Foundation. IÂm confident that these auctions will be well received. If so, I believe Ill-Eagle and the T. J. Martell Foundation will make these music memorabilia auctions regular charity auction events in an effort to combat and eventually find a cure for insidious diseases such as cancer leukemia and AIDS.Â

In related news, the MusicChoice Network has agreed to donate banner advertising on all of their broadband cable channels to promote the Gold and Platinum Charity Auction for Leukemia, Cancer and AIDS Research.

Columbia/Sony music industry executive Tony Martell, who was instrumental in the signing of Ozzy Osbourne and Stevie Ray Vaughn, among others, founded The T. J. Martell foundation in 1975, in memory of his son, T.J., a victim of leukemia. The T. J Martell Foundation has since raised more than $200 million over 30-years to combat the worldÂs three most deadliest diseases. The T.J. Martell Foundation remains dedicated to raising funds for the innovative initial and ongoing research into the treatments and cures of leukemia, cancer, and AIDS at the leading eight research facilities throughout the United States.

All proceeds from the Gold and Platinum Charity Auctions will benefit the life saving research conducted at The Mayo Clinic, and the Memorial Sloan-Kettering and Columbia Presbyterian Cancer Centers and others. The T. J. Martell Foundation has auctioned off many celebrity experiences for charity on eBay such as a Day In The Studio With Metallica, front row Bon Jovi concert tickets, tickets and stage access for the 2004 and 2005 Vans Warped Tour, autographed instruments, as well as other experiences with top bands and recording artists.

Those individuals interested in bidding on these very special Gold and Platinum Awards can access all of the T. J. Martell Foundation eBay auctions by clicking on the ÂT.J. Martell Auctions on eBayÂ link found at www dot tjmartellfoundation dot org 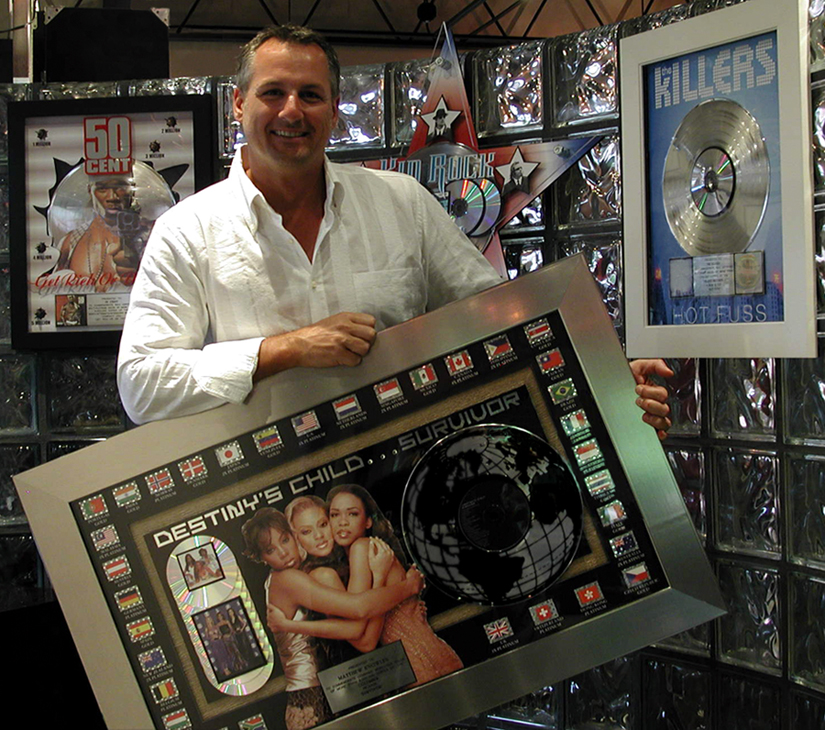 Darryl Sage, President of Ill-Eagle EnterprisesDarryl Sage, President of Ill-Eagle Enterprises, manufacturer of 70% of all RIAA-approved Gold and Platinum Music Industry Awards, shows off an example of the awards that will be auctioned off in the monthly Gold and Platinum Charity Auctions for Leukemia, Cancer and AIDS Research.

Darryl Sage, President of Ill-Eagle EnterprisesDarryl Sage, President of Ill-Eagle Enterprises, manufacturer of 70% of all RIAA-approved Gold and Platinum Music Industry Awards, shows off an example of the awards that will be auctioned off in the monthly Gold and Platinum Charity Auctions for Leukemia, Cancer and AIDS Research.