Whitney Wolanin (pronunciation key: WO Lan in) the six foot tall teen athlete & national recording artist, singer, songwriter, and High School Honors student with the soulful Multi Octave Voice saw her original HIT single "GOOD" reach the 32nd position on the Top 40 AC40 chart at radio. This radio HITS chart is based on reported monitored radio airplay around the country by FMQB the radio station airplay monitoring trade service. GOOD is an original song co-written & co-produced and performed vocally by Whitney Wolanin. GOOD is the first cut on the album Funkology XIII (the study of Funk) which contains 13 hit songs with the roman numeral moniker XIII representing Whitney's age (13) at the time of recording.

Women's Basketball a nationally circulated magazine on newsstands will run a Feature story on Whitney Wolanin and her anthem "Good" in the Dec. 05 issue. Mike Miazga, Women's Basketball Editor in Chief in an E mail from the Chicago offices of the magazine stated:

"The fact that Whitney is able to balance basketball, schoolwork, and her recording career speaks volumes to the type of tremendous person she is". "Whitney's story will be one that I know our readers will enjoy" Mike Miazga, Women's Basketball Editor in Chief

Whitney Wolanin has recently completed numerous interviews for radio, TV, print media and will be conducting LIVE on air interviews with radio stations around the US including Hawaii where "Good" has been getting radio airplay.

The Whitney Wolanin song GOOD was selected by TM Century to go on their latest all HITS 2 disc compilation being sent to Radio stations around the world including the Armed Forces, Wal-Mart, & Target radio networks. Also on the HITS CD with Whitney Wolanin were HITS by Green Day, Ryan Cabrera, Ricky Martin, Fantasia, and perennial rock band Styx. TM Century also included a full copy of the Whitney Wolanin album Funkology XIII as the second CD in this HITS package.

Whitney Wolanin is also working in the studio co-writing an original copyrighted holiday season song titled "Christmas" (the Warmest Time of the Year) an up-tempo feeling good holiday season song with a unique signature bass line in collaboration with Funk Brothers Bass Legend Bob Babbitt and producer-songwriter Vincent Wolanin. Christmas is expected to be released to radio stations around the US on October 15, 2005.

Whitney Wolanin Funkology XIII is available at the

and at all Tower Record Retail Stores nationwide 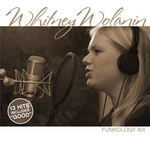