Gourmet Spanish Food Aficionados Will Soon Have Their JamÃ³n IbÃ©rico

The Spanish government has just approved the first JamÃ³n IbÃ©rico production facility that meets USDA standards for export to the United States. LaTienda.com, a family-owned gourmet Spanish food retailer based in Williamsburg, VA, will fly in the first IbÃ©rico products as soon as they are available. In fact, the Harris family has worked for more than eight years to make this possible. Soon this prized Spanish gourmet food, perhaps the finest of all hams, will be available in the US. JamÃ³n IbÃ©rico, marbled with rich golden fat and infused with the flavor of acorns, is also remarkably good for you. The curing process converts the fat of the ham into heart-healthy mono-unsaturated fat. This gives the ham beneficial qualities similar to olive oil. 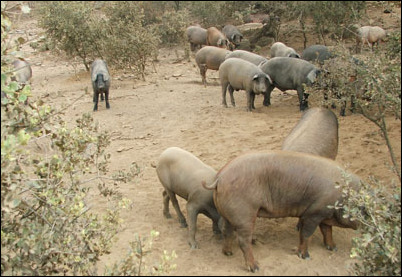 LaTienda.com, a family-owned gourmet Spanish food retailer based in Williamsburg, VA is pleased to announce that on September 15th the USDA and the Spanish government approved JamÃ³nes FermÃ­n as the first producer of JamÃ³n IbÃ©rico eligible to export to the USA.

This is a very satisfying day for the Harris family, owners of La Tienda. Patriarch Don Harris remarked, ÂMy wife Ruth and I initiated the quest for IbÃ©rico ham in 1997 when we first visited the fabled ham town of Jabugo in western AndalucÃ­a. Through the ensuing years, our entire family has blanketed western and southern Spain meeting the farmers and potential producers of this coveted product.Â

La Tienda intends to fly in the first IbÃ©rico products as soon as they are available. This means that American gourmets may be able to enjoy IbÃ©rico pork loin (lomo), chorizo and other IbÃ©rico sausages before Christmas, if all goes well. But it will be another year till the shoulders ('paletas') will be available, and nearly two years till Americans can enjoy the full IbÃ©rico hams ('jamÃ³nes'). The traditional, bone-in 'pata negra' JamÃ³n IbÃ©rico take twenty-three months to cure, and the producer will be hanging them to cure in the mountain air later this week, so that these hams should be available to the US market in the fall of 2007. When these hams finally arrive, the price for the best ones is likely to be around $1,000 per ham. More than 300 aficionados have already placed $199 deposits for the hams with LaTienda.com, securing the right to buy an IbÃ©rico ham as soon as they are available.

JamÃ³n IbÃ©rico is perhaps the finest of all hams, as much a national treasure to Spain as caviar is to Russia, truffles are to Italy, and Kobe beef is to Japan. JamÃ³n IbÃ©rico hams are the pride of Spain, and Spaniards consume the most of the annual production in their own country. Some producers even have waiting lists of several years for their best products.

The unique flavor of JamÃ³n IbÃ©rico comes from the pigs themselves and from the way they're raised. The rare Iberian black-foot pigs ('pata negra') live only in Spain, where they have foraged for acorns in the cork oak forests of western Spain for millennia. This diet of acorns contributes to the flavor of the ham, and causes their beautifully marbled meat to be high in heart-healthy mono-unsaturated fat, giving the ham beneficial qualities similar to olive oil. This quality is apparent to the naked eye: thin slices of jamÃ³n glisten on the plate as the golden fat melts with room temperatures rises above 70 degrees F.

Don Harris fell in love with Spanish cuisine in the 1960s and was stationed in Spain as a Navy chaplain in the 1970s. He launched LaTienda.com with his wife and three sons in 1996. The family operated company was the first to introduce jamÃ³n serrano over the Internet to the families of America, and they have been on a quest to bring jamÃ³n ibÃ©rico to America for more than eight years.

These hams could not be imported and sold in the US without a Spanish slaughterhouse and processing plant that met USDA standards, but for years Spanish producers were reluctant to make the investment to get USDA certification. The only Spanish meat products exported to the U.S. now are made from animals slaughtered at USDA-certified plants outside Spain. That includes JamÃ³n Serrano, a country ham that is similar to Italian prosciutto.

ÂOur goal has been to secure a firm commitment from at least one Spanish company to produce JamÃ³n IbÃ©rico for the U.S. market. This has proven to be a far more complicated process than the one followed by La Tienda when we brought the first JamÃ³n Serrano to homes across America. But our patience has paid off.Â

ÂOur trip this last June was particularly satisfying,Â Mr. Harris continued, ÂIn addition to visiting respected producers, my sons Tim, Jonathan and I were the guests of leading scientists at the University of CÃ¡ceres, who have dedicated their academic lives to the study of and appreciation for these unique animals. They introduced us to some frisky Âteen-ageÂ Iberian pigs that were playing at the waterhole at a finca (ranch). More than scientists, they were gourmets, and treated us to an incredible feast which began with plates of glistening jamÃ³n ibÃ©rico.Â

In the past twelve months, members of the Harris family have visited Spain four times in their effort to import the best JamÃ³n IbÃ©rico, as well as the first. La Tienda expects that a handful of other Spanish producers will have USDA-approved production facilities within the next few months.