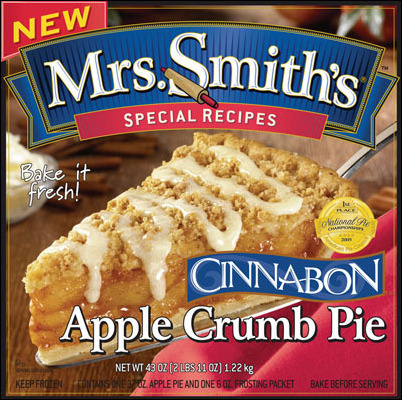 It’s just before the Thanksgiving holiday and all the packaging has been completely redesigned. Mrs. Smith’s fans are certain to notice her make-over.

Mrs. Smith's®, known for her award-winning pie, has her sights set on the American Music Awards (AMA) -- and the legendary Dick Clark. Sometimes a girl’s got to do what a girl’s got to do, and delighted with a recent, top-to-bottom packaging make-over, Mrs. Smith’s plans to show off her new look on the red carpet.

Well, sort of. This month, America’s iconic dessert-maker, will make her backstage debut at the 2005 AMA. At the invitation of Dick Clark Productions, Mrs. Smith’s is heading to Hollywood for the 33rd annual show, which airs on ABC-TV, Tuesday, November 22nd.

Best known for traditional, bake-it-fresh desserts, Mrs. Smith's will be featured in the official AMA celebrity gift bag. These highly coveted gifts are given to each of the AMA’s celebrity presenters and performers -- historically, a who’s who of the entertainment industry. Announced for 2005, at this writing celebrity presenters and performers are Mariah Carey, Sheryl Crow, Tim McGraw, Santana, The Rolling Stones and show host Cedric the Entertainer.

Red-carpet watchers can expect Mrs. Smith’s to sport her new bold, blue, banner at the AMA, joked Bob Trombino, Senior Director of Marketing and Category Leadership for Schwan's Bakery, Inc. which sells Mrs. Smith's desserts and breakfast treats. It is rumored that Mrs. Smith’s may don one of her 1st Place blue ribbons from the American Pie Council’s 2005 Pie Festival.

“The American Music Awards is a great coming out party for Mrs. Smith’s new look,” Trombino explained. “It’s just before the Thanksgiving holiday and all the packaging has been completely redesigned. Mrs. Smith’s fans are certain to notice her make-over.”

Based in Suwannee, Georgia, Mrs. Smith’s was founded in the early 1900s when Amanda Smith began baking from her home. Today, Mrs. Smith's desserts can be found at supermarkets nationwide. For more information on Mrs. Smith’s contact http://www.mrssmiths.com.

“We urge consumers to pick up their favorite Mrs. Smith’s pie and take home a taste of the awards show," said Brand Manager Mike D’Addieco. “And tune in to the AMA on November 22nd.”