Delivering 8 Dual Core 5.2GHz Processors in a single "Viper™ Supercomputing Node" (VSN™), and up to 256 such VSNs connected together into a "Viper Supercomputing Complex" (VSX™), the Viper VSX™ system is said to deliver the highest concentrated computational horsepower for the buck, with the lowest power demand and least heat. It also speaks Windows(r) and Unix(r): thereby making it more applicable to today's computing than either Cell (from IBM) or Niagra (from Sun). http://www.compamerica.com

On the heels of announcements by Sun regarding its "Niagra", and IBM regarding its "Cell" chips, CompAmerica (http://www.compamerica.com) has released its Viper Supercomputing Complex™ (a/k/a: Viper™ VSX™). Viper™ VSX™ is a supercomputer system capable of delivering up to 2048 simultaneous AMD Opteron 880 Dual Core Processors in a connective crossbar - switched fiber channel driven environment. Viper™ VSX™ is designed for applications requiring considerably more conventional computational capacity than found in what CompAmerica calls the: "highly specialized and very different programming models" that IBM Cell or Sun Niagara today allow for, while still competing with them.

Viper™ VSX™ is programmable today using conventional programming methods. Its great speed comes from "Extreme Parallelism" and "Extremely fast transport busses", rather than relying on a single RISC processor accelerated by surrounding specialized graphics mathematical units, as in the case of IBM's Cell.

"I kind of like IBM Cell and Sun Niagra, which remind me of my old Proteus computer back in 1983/1984. Proteus was a 'slim' supercomputer. We had been simultaneously developing an advanced Supercomputer for the US Government never publicly seen outside of the Military, carefully held in classified status. Back then, everyone was trying to steal Proteus. Some even tried to sell it with its designer to the Russian KGB during the cold war. Russia was anxious for technology capable of piloting advanced bombers or nuclear weapons guidance. There was a lot of in-fighting (even though it was Illegal for companies to be selling restricted technology to the Soviet Union) and many of them went under or were fined. Major litigation erupted over who owned Proteus, and the designer won." stated the company's CEO.

"Yet, today's somewhat strangely thin Cell and Niagra chips, without a fully supportive operating system familiar to programmers, make it unlikely that these highly specialized Sun and IBM chips will find anything but Niche applications."

"One can surmise that IBM may be setting its sights at 3D reality Remote Flight Control for robot fighters. But compared to computing in the back offices, on Wall Street, in banks, and in R&D Labs in every major corporation and SMB in the world, where Viper™ would hit it's stride, how many Robot Fighter Jets can IBM build Cell's for? Wouldn't you need to start a pretty big war to sell a lot of them?" asked the company pointedly.

"Meanwhile, our Viper™ speaks Unix and Windows, tapping into existing programming skills today. It has awesome ability to drive large array Screens, with 3DLabs Realism video Adapters... each with nearly a gigabyte of Video Ram."

"Even though Viper™ VSX™ is more than competant to take on applications like IBM Cell and Sun Niagra aspire to, we believe our conventional-to-extreme design makes more sense. Tightly coupled communications running through a slick, two-level crossbar matrix and its ultra high performance 10GB/second switched fiber channell allow Viper™ VSX™ to work as a super DP machine, as well as a supercomputer. Viper™ VSX™ also offers a better price point. Viper™ VSX's™ traditional Unix and Windows application environment allows acceleration of performance to a degree consistent with modern applications' designs."

CompAmerica built the Viper™ VSX™ system around its renowned AX6 Operating System. AX6, which supports what the company calls "probably the most robust operating systems resources in the world, thanks to its U-California Berkeley compatible Kernel has incorporated "virtual Windows 2003 uni-clusters" into the design. Windows/Vista/Unix family applications run in tandem.

"Unlike Cell or Niagra, there really is no need to do anything but continue building on your existing applications. However, our military, scientific, and commercial customers can also redraw the playing field, taking advantage of unheard of parallelism, in the higher end configurations." stated a spokesperson.

CompAmerica indicated VSX support also includes AX6's "8th Man" file, storage and data sharing facility allowing up to 255 VSXs, each with 256 Viper Compute Nodes to interconnect. It can form even larger supercomputer clusters of up to a million Opteron 880 CPU Cores. Information about AX6 can be found at http://www.compamerica.com/AX.

The company indicated that a single Viper™ Compute Node costs between $20,000 and 40,000 and is available to build to order today, and comes with a five year on-site limited warranty plan. Large VSX configurations multiply the cost by the number of Compute Nodes in the system.

"We do like Sun's and IBM's ideas," said a company spokesperson. "IBM may be fearful taking Cell's design deeply into General Data Processing which might take away from IBM's 370/6000-architecture Mainframe business."

"We, at CompAmerica, however, suffer from no similar predisposition. We would love our Viper™ VXS™ to displace as many of their customers' large scale systems purchases away from IBM and Sun, while also directly competing with Cell or Niagra at the ground level of graphics."

CompAmerica has been building supercomputers since 1987. Its lead design team built classified supercomputers capable of flying advanced stealth fighers/bombers, between 1978 and 1989, for Pentagon clients.

Wiith the pricing breakthrough of the Viper™ VSX™, CompAmerica can address the hundreds of thousands of companies using old fashioned mainframes or server oriented Data Centering such as IBM/Dell/HP and SUN have sold them, with a considerable pricing advantage, offering greater compatibility with today's Windows/Vista and Unix/Linux technologies.

For more information, CompAmerica can be reached at 908-931-1200, and can be found on the web at http://www.compamerica.com. 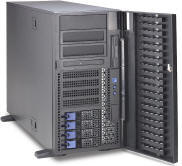