The trips, North Korea and the Mass Games, will mark the first time in the last fifty years that major American tour operator has been allowed to operate trips to the Democratic People’s Republic of Korea. 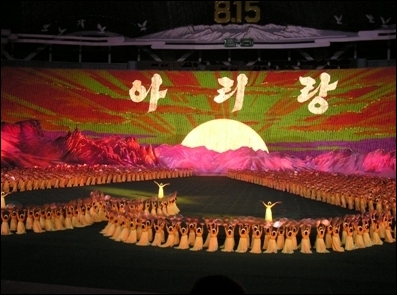 the Olympic opening ceremony look like a school play

The famed Mass Games, an extravaganza one witness described as making “the Olympic opening ceremony look like a school play,” are the centerpiece of two Geographic Expeditions trips to rarely visited North Korea in August 2006. The trips, North Korea and the Mass Games, will mark the first time in the last fifty years that major American tour operator has been allowed to operate trips to the Democratic People’s Republic of Korea.

The planning, logistics, and permissions for such trips are “daunting and delicate,” says Jim Sano, president of the San Francisco-based travel company. “But pioneering travel firsts has always been one of GeoEx’s specialties, and we have nailed down the details. Our leaders, Sarah Timewell and Daniel Levitsky, both British, have traveled extensively in the DPRK, and know its history, politics, and on-the-ground realities very well. This is a marvelous opportunity for our travelers to experience North Korea behind the headlines.”

In addition to the Mass Games and three days of sightseeing in Pyongyang, the nation’s capital, the GeoEx groups will visit the Demilitarized Zone (DMZ) separating the two Koreas, the historic pilgrimage site of Mount Paekdu, and, in a first for GeoEx guests, will spend a night with a North Korean family in the beautiful Mount Chilbo area.

The Mass Games, one of the world’s largest human spectacles, are an art form unique to the DPRK. In a stadium holding 150,000 people, said to be the largest seating capacity in the world, 80,000 dancers and gymnasts emerge from months of grueling practice and perform against a massive backdrop of rapidly changing flash cards showing images of North Korean unity, strength, and agricultural bounty.

After taking in the incredible Games and Pyongyang’s remarkable array of Stalinist monuments, GeoEx’s travelers will visit the border cities of Kaesong and Panmunjom, on the edge of the DMZ. Kaesong is home to the Koryo Museum, a collection of charming traditional buildings that preserve historical artifacts from Korea’s pre-socialist past. Nearby is the DMZ, a border marked by a surprisingly tiny “wall” only six inches high and under vigilant watch by soldiers from both sides of the line. “It is a surreal, oddly peaceful scene,” says trip co-leader Timewell, “the ideological distance between the two Koreas is as large and gaping as the physical gap here is small. It is said that at night you can see the lights of Seoul, roughly 30 miles away.”

After returning to Pyongyang, the GeoEx groups will fly by private charter to legendary Mount Paekdu, the highest mountain on the Korean peninsula and an important pilgrimage destination for North Koreans. The massive peak, an extinct volcano crowned by the dizzyingly deep Lake Chon, is mentioned in the Republic of (South) Korea’s national anthem and is venerated in the North as the birthplace of Kim Jong Il, the country’s leader. Another charter flight will take the groups to rarely-visited Mount Chilbo in the northeast corner of the country, where they will hike through the area’s spectacular forests and rock formations, and overnight with a North Korean family.

Land costs for the August 12-23 and August 23-September 3 departures of North Korea and the Mass Games begin at $5190. Space will be limited on both trips, and GeoEx encourages early sign-ups. For details please call 800-777-8183 or visit http://www.geoex.com.

A pioneer of travel to remote and challenging destinations since 1982, Geographic Expeditions offers a varied portfolio of overland tours, treks, walks, and expeditionary voyages to the world's most astonishing places. GeoEx was the first American company to negotiate protocols with the Chinese government to operate tours to the Tibetan Himalaya and far western China. It inaugurated the first journeys by an American company to Iran and Libya, operated the first commercial crossings of the Patagonian Ice Cap and fabled South Georgia Island, scene of Sir Ernest Shackleton’s epic, and scored American travel firsts in the hinterlands of Patagonia, Bhutan, Vietnam and the Asian Arctic, among other exotic and beguiling places. Its roster of innovative journeys has steadily expanded--to Nepal, India, Bhutan, the Arctic and Antarctic, the Middle East, Central and South America and onward--and today the company sends more than 4,500 travelers a year to all seven continents.