Many of Billy Meier’s other UFO photographs have also been found incapable of being hoaxed using only methods available 25-30 years ago. 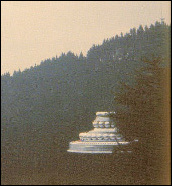 The tree is one of the European true firs -- Abies species. The picture has only a portion of the top of the crown, 10 to 15 feet. There could be anywhere from 10 to 50 feet of tree bole below the picture.

Since the mid-1970s, UFO investigators worldwide have been bewildered by the many hundreds of clear daytime UFO photos and the movie films taken by the Swiss contactee, Eduard “Billy” Meier. Many rejected Meier’s abundant photographic (and other hard physical) evidence as being too good to be true.

Heavy debunking of the case ensued, despite all the evidence from the primary investigators from 1975-1986, and authentication by various scientists and experts, that the case could be no hoax. But the photo* from which the image on the right was recently cropped went largely overlooked. Meier took it, along with many other shots, in the hills of Switzerland some 15 miles southeast of Zurich, in 1981, long before personal computers and photo-manipulation software were readily available.

Regarding the tree in front of the craft’s right side, Professor Emeritus D. A. Brodie of the College of Forestry, Oregon State University, said: "The tree is one of the European true firs -- Abies species. The picture has only a portion of the top of the crown, 10 to 15 feet. There could be anywhere from 10 to 50 feet of tree bole below the picture."

The extent of the tree above the UFO is estimated by Professor E. C. Jensen, College of Forestry, Oregon State University, to be between 6-10 ft. This yields a UFO diameter of from 9 to 15 ft., ruling out a model UFO, a possibility that must always be considered.

A recent attempt by a professional model maker/photographer to duplicate Meier’s photos (and daytime video) of this UFO (commonly referred to as the “Wedding Cake” UFO) has failed, as have past efforts by a variety of skeptics dating back to at least 2001. While there are six categories of physical evidence in the case that are referred to as “still irreproducible,” there is a voluminous amount of prophetically accurate, published information also to be reckoned with in the case, as well as some 88 eyewitnesses (and five other photographers) who can affirm that Meier is a genuine UFO contactee.

To learn more about the Meier case – its other evidence, witnesses to Meier’s contacts, and the documentation of the prophetic information, as well as linking to Meier-case debunking web sites and articles that refute them, see: http://www.tjresearch.info/Links_for_PR.htm.