Sterling Braswell takes readers on a shocking journey into the history of one of the quintessential drugs of our times. Methamphetamine is everywhere today, and is quickly becoming one of the strangest drug epidemics the world has ever seen.

The average person would probably think that methamphetamine is a relatively new drug that appeared suddenly overnight. Actually, methamphetamine has been around since the early 1900’s and has had a quiet growing affect on the population as it rapidly spreads across the physical and socio-economic boundaries of America. Also know as meth, crystal, crank and speed, it is the backbone of Ritalin and the “club drugs” ecstasy, eve and cat. With the widespread sharing of recipes for manufacture over the internet, meth has an increasing grip on American culture.

Sterling Braswell, author of “American Meth: A History of the Methamphetamine Epidemic in America” (ISBN 0595380212) takes readers on a historic journey through the many incarnations of this now famous molecule, and the deep but little-known impact it has had on American life over the course of the last century. Housewives, heads of state, businessmen and poets alike have acquired a taste for the yellow, crystalline powder. Everyone from Hitler to President Kennedy and Elvis to Jack Kerouac indulged in one of its many forms, and its presence has been like an invisible hand, shaping events and preparing the foundation for a world wide epidemic.

Braswell’s life was dramatically altered by methamphetamine and his deeply personal story was the inspiration for writing “American Meth.” Searching for information with the hopes of understanding and documenting the destructive effects of methamphetamine on his addicted wife, Braswell discovered a serious lack of awareness regarding this subject. “I did an endless amount of research and interviews with medical professionals, law enforcement, and substance abuse counselors,” explains Braswell. “Realizing I had compiled an extraordinary amount of vital information on the subject, I decided to document this for others people as well.”

The physical and psychological effects of methamphetamine are enormous and irreversible. It’s incredibly addictive nature is devastating and almost immediately can destroy the user’s humanity, and that of the people touched by it. “American Meth,” is a personal and historical account of methamphetamine and is a must read for anyone concerned about the future of this shocking epidemic.

Sterling Braswell graduated from Texas A&M in 1987 and went on to work as a technical and strategy consultant for Microsoft. He has spent the last four years researching and writing on the methamphetamine phenomenon. He lives in Houston, TX with his son, Spencer. “American Meth” (ISBN 0595380212) can be purchased at online bookstores. For more information, go to website/blog http://www.americanmeth.com. 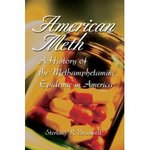