Demand For Information On Profiting From Google’s Lucrative AdSense Program Rockets The AdSense Code To #6 On The New York Times Best Seller List. 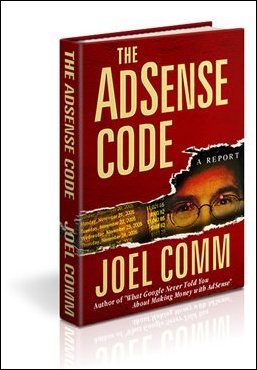 those sites rarely earn much money now because Google has caught on to attempts to manipulate the system and as a result they have changed their algorithm regularly to move those sites out of the search engines top rankings and have many times outright banned the sites (often called black hat sites) and the purveyors from the site and the AdSense program.

Everyone is rushing online to take advantage of the perpetual money machine that Google has made available to anyone . . . even the author of The AdSense Code’s mother. “It is a little like the California gold rush must have been,” says author Joel Comm who earns between $600 - $900 per day from Google by displaying their ads on his websites using Google’s AdSense program. Virtually anyone with a website or blog can earn money with the program and thousands of average people are, people like Comm’s mother whose site TravelswithSheila.com, talks about her adventure travel experiences around the world and each page of her site sports the small text ads. Whenever someone clicks the ad, an advertiser pays an amount that they’ve bid for the click and Google splits the money with Comm’s mom and others like her.

According to Comm, the program works like this, simply go to Google’s site, input some basic information including the site where you’ll be displaying ads, submit your information and wait a few days for Google’s approval. Once approved, log into the Google AdSense website, make some simple choices about how you want the ads to look, copy the code and paste it into your website to start earning.

Not everyone on the Internet is as thrilled as Comm by the easy to use process and some point to Google as being proliferated by “junk sites” that serve no purpose other than to collect links. But according to Comm who is opposed to such sites and explains in detail why they are a bad idea, “those sites rarely earn much money now because Google has caught on to attempts to manipulate the system and as a result they have changed their algorithm regularly to move those sites out of the search engines top rankings and have many times outright banned the sites (often called black hat sites) and the purveyors from the site and the AdSense program.”

“My book is focused on helping anyone who wants to make legitimate income from a program that offers more opportunity to actually earn money on the internet than just about any other program I’ve ever seen.” And, Comm should know, he sold his previous company, ClassicGames.com, to Yahoo!, which has renamed the site Yahoo! Games. Shortly afterward he began experimenting with Google’s AdSense program. After discovering how easy it was to generate a significant income, he decided to start teaching others the program. “There is more opportunity that any one person can ever harvest, there is as much opportunity as there are topics to be discussed on the internet.” I quickly realized that the biggest thing keeping people from earning was access to easy, accurate information about the program so I wrote the book.” A very aggressive upstart publisher, New York based Morgan-James picked up the book and within weeks it debuted at #6 on the New York Times July 2nd, 2006 underscoring the real desire for this information making it Morgan-James first New York Times Bestseller and Comm their most celebrated author.

“There is a real possibility for virtually anyone to make money with this program, it equalizes the opportunity on the internet and the great thing is that people can get started earning a passive income without risking thousands of dollars in the process,” opines Comm. “I hope everyone gets on board with this program.”

The AdSense Code is available at booksellers worldwide and on the internet. Joel Comm is a socially conscious Internet entrepreneur and technology visionary who creates family friendly web experiences while showing people how to earn income online. Recognized by many as the leading expert in Google AdSense, Comm’s materials have helped thousands discover the strategies to multiplying their income with AdSense. For review copies or more information contact InfoMedia, Inc. at (405) 348-2800 or visit http://www.joelcomm.com