Greg was over 40 pounds overweight and could hardly keep up with many of the military-style exercises. After over two years of gradual lifestyle changes, he has lost over 40 pounds and is in phenomenal shape as a 40 year old. That is weight loss at its best. 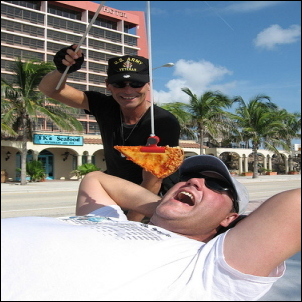 Greg's weight loss progress has nothing to do with eating and exercise. It has everything to do with changing his way of thinking and designing his lifestyle, taking charge and taking responsibility regardless of the external circumstances. No more excuses whatsoever.

It's time to tell a lifestyle-based weight-loss story that is not based on quick fixes but on a change of thinking about life and living. Over two years ago Greg Gregory came to Lt. Col. Bob Weinstein for personal training on the beach in Fort Lauderdale, Florida. Greg is self-employed and does a lot of business related travel and therefore also eats out frequently.

Colonel Weinstein is retired from the US Army Reserves with 30 years of service and is a speaker, writer and beach boot camp instructor on Fort Lauderdale Beach. He has been featured on, among others, the History Channel and Fox Sports Net and has a website site with the rather humorous web domain, http://www.NoMoreCryBabies.com.

"My constant measurement of performance has been my water bottle belt which I wear for workouts. Just the other day, I had to adjust it inward again. I've lost some serious body fat in my midsection and the fat loss has not yet stopped.", Greg said.

"Greg's weight loss progress has nothing to do with eating and exercise. It has everything to do with changing his way of thinking and designing his lifestyle, taking charge and taking responsibility regardless of the external circumstances. No more excuses whatsoever." Colonel Weinstein explained.

"There are enemy soldiers on American soil. The names of these soldiers are Heart Disease, Cancer and Stroke. They are killing over 3,000 Americans a day." Col. Weinstein discussed this sobering statistic with Greg and assured him that he, and the rest of us, can fight those enemy soldiers. Greg and Col. Weinstein then declare war on these "enemy soldiers" and they move out to do battle with an unhealthy lifestyle.

So what did Greg actually do to lose over 40 pounds? Here's what he did:

Greg now has a natural heightened awareness about what and how much he eats as well as always planning on incorporating as much natural movement into his lifestyle as possible. He now feels better and has more energy. Greg is has finally gotten his BMI very close to the normal range of 18-24.9. His BMI at present is 25.7. BMI measures the propensity for disease. That simply means that he does not have to work on getting in the lower range of BMI. Once he hits the normal range starting at 24.9, his propensity for disease is significantly lowered.

Body mass index (BMI) is measure of body fat based on height and weight that applies to both adult men and women.

BMI Online Calculator at the website of the American Diabetes Association: http://www.diabetes.org/diabetes-cholesterol/bmicalc.jsp

Lt. Col. Weinstein was born in Washington, D.C., grew up in Virginia and spent 20 years in Berlin, Germany; he is retired from the Army Reserve as a Lieutenant Colonel with 30 years of service and spent about half of that time as a military instructor with the Command & General Staff College.

He has been featured on radio and television, among others, on the History Channel and Fox Sports Net as well as in various publications such as the Washington Times, RAZOR magazine and the Miami Herald.

He specializes in a military-style workout on Fort Lauderdale Beach that incorporates strength, cardio, flexibility and agility training, both personal training and group sessions.

Bob is known as the Health Colonel and is a motivational speaker and is a member of the National Speakers Association. A sample of some of his topics:

He is also presently writing a book on personal development, health and fitness.

His burning desire is to help others lead healthier and happier lives and reduce some of the preventable health-related suffering and deaths caused by an unhealthy lifestyle.

Some Need Pizza-on-a-stick for Exercise Motivation