It might seem strange to "introduce" a London hotel that is almost 80 years old, but such is the transformation wrought on this iconic building since acquisition by the Radisson Edwardian group (http://www.radissonedwardian.co.uk) that the Mayfair is, in effect, a new hotel.

More than £75 million has been spent on a top to bottom, front to back, re-invention that leaves not one room in the entire building untouched. Highlights include over 80 new bedrooms with an extra floor added over Berkeley Street and a complete new wing at the rear of the hotel.

The Mayfair bar has been re-designed to become one of the most stylish meeting places in the West End of London, with its own entrance off Berkeley Street. A destination restaurant, Amba, occupies the site of the original bar and offers seasonal British food with a modern, slightly lighter touch served from kitchens open to view from several of the tables.

Mayfair's most sophisticated spa offers an area of calm and relaxation including the Cleopatra mud bath experience for two -- surely among the most romantic indulgences available in any London hotel.

There are 10 signature suites -- designed to be the most stylish in London and all individual in design; 385 bedrooms and 11 "Al Fresco rooms" with external decking, television and private dining facilities.

With its show business connections and history, it is appropriate that the Mayfair Hotel now boasts the largest and most modern private cinema in London, seating 201 in total comfort. The new Crystal Room is destined to be the Capital's hottest venue for functions. Capable of seating up to 180 guests for dinner and 250 guests theatre-style, this is the "Grand Room" brought right up to date and already attracting prestigious events for the next 12 months. Imaginative décor includes the largest Baccarat chandelier ever delivered in Europe -- worth over £1 million.

Only slightly smaller is the Danziger Room, named after the film moguls who owned the Mayfair Hotel in the '50s, which can seat up to 150 guests for dinner and 200 guests theatre-style.

Of course, the physical changes are the most visible part of the transformation, but the Mayfair team have brought a similarly profound revolution in the way that hotel guests are treated.

"We have gone out of our way to ensure that anyone is welcome at the Mayfair," says Charles Oak, general manager. "We've swept away all the stuffy nonsense that 5-star hotels have historically felt was so important -- and which lots of people today find oppressive -- and replaced it with a relaxed, service-led determination to make people feel at ease. We call it luxury without pretension and that slogan informs everything we do."

For reservations and information about the Mayfair Hotel, or any of the other London Hotels in the Radisson Edwardian group please visit http://www.radissonedwardian.co.uk. 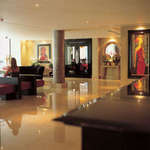