Smoke Out Big Tobacco On The Great American Smoke-Out Day; What The Tobacco Industry Still Doesn't Want You To Know

The author of the new book, Ending the Tobacco Holocaust, Michael Rabinoff D.O. Ph.D., (Elite Books, November 2006, hardcover, $24.95, ISBN 1-60070-012-8, available at local bookstores, Amazon, Borders, Barnes and Noble) is a psychiatrist with many public presentations to his credit. He has a driving passion to get the message of his new book to a wide audience, and the ability to engage experienced professionals to assist him towards that goal. More information about the book, and additional free information, can be found at http://www.TobaccoBook.com.

Dr. Michael Rabinoff D.O. Ph.D., a board certified psychiatrist on the research faculty of the Department of Psychiatry at UCLA, sees patients at The Permanente Medical Group, and is C.E.O. of Biogenesys, Inc., a small research corporation. 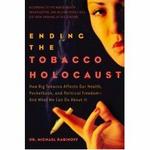