New plant-sourced calcium supplement being used in human clinical study to improve bone health. All current calcium supplements are derived from rock or made in a laboratory, so this new calcium complex is expected to have a significant effect on the health supplement market 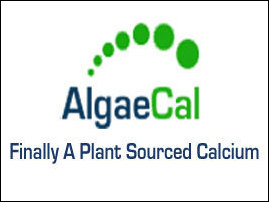 Clinical evidence supports a multi-factorial approach to improving our bone health including not only calcium, but co-factors such as magnesium and trace minerals which are naturally present in this marine algae. Calcium is notoriously difficult to absorb, so the commercialization of a

From the time that Sir Humphrey Davey discovered the element calcium in 1808 until today, the only forms of calcium supplements available are inorganic calcium carbonate or calcium made in laboratories. Go to your local pharmacy or health food store and ask for a plant source calcium tablet, and they will look at you like you requested a T-bone from an endangered species! That is because they have not yet heard of a marine algae called Algas Calcareas.

Calcium is simply not available from plants - or at least it wasn't until CEO of Algaecal International, Dean Niles received a phone call from a South American engineer claiming he had a better calcium supplement.

Niles says, "After looking at the lab analysis showing large amounts of calcium, magnesium and more than 70 trace minerals in this algae, I got on a plane and headed to a remote wilderness off the coast of South America. What I saw there amazed me. Tennis ball size algae rolling up on the sandy beach with the tide. It was surreal in the early morning light to view the world's first pure plant calcium wash ashore. When we lab tested it and 97% of the calcium went into solution in a test mimicking stomach conditions, it proved we had highly bio-accessible calcium, and I knew we had a winner. We then trademarked the name AlgaeCal®, applied for worldwide patents, and have now co-funded a human clinical study which is underway."

AlgaeCal clinical study supervisor Gilbert Kaats Ph.D of Itegrative Health Technologies Inc, San Antonio, Texas, says "the current focus on taking large amounts of purified calcium may not be the answer for bone health. Each mineral has an effect on the other minerals in your body so you can throw off the balance if you ingest large amounts of any single element." Dr. Kaats continues "Clinical evidence supports a multi-factorial approach to improving our bone health including not only calcium, but co-factors such as magnesium and trace minerals which are naturally present in this marine algae. Calcium is notoriously difficult to absorb, so the commercialization of a "pre-digested" calcium from a sea algae may be particularly beneficial for older people, those with compromised digestive tracts, and those with osteopenia or osteoporosis."

It is possible to get calcium from vegetables you eat, but hardly practical. For example the highest levels of calcium found in commonly consumed vegetables is Broccoli at 94 mg per cup. You would need to eat 11 cups daily to reach your RDA of Calcium. If you do not eat substantial dairy or supplement it is really hard to ingest adequate calcium from food. AlgaeCal® is being incorporated into chocolate bars, cookies, meal replacement shakes, and bone health supplements.