New From Vision Press, The Jesus Tomb: Is It Fact or Fiction? Book Discredits Documentary The Lost Tomb of Jesus

A new book says The Lost Tomb of Jesus documentary was deceptive to its viewers and illusory to the scholars that worked on the production. 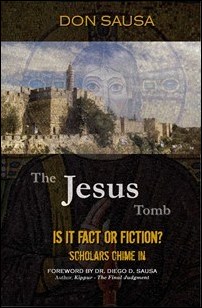 New evidence surrounding The Lost Tomb of Jesus including personal interviews by leading scholars consulted in the film, suggest the 2,000 year old Jerusalem tomb is NOT the Jesus of NazarethÂs final resting place. In the new book, The Jesus Tomb: Is It Fact or Fiction? Scholars Chime In, Don Sausa reviews all of the claims, math, and the ÂevidenceÂ of The Lost Tomb of Jesus, to simply answer one question: Is it fact, or fiction?

The bookÂs findings suggest that some plausible explanations were conveniently ignored in the documentary, such as the different types of family relationships Jesus and Mariamne [ÂMary MagdaleneÂ] could have had. For instance, they could have been father and daughter, paternal cousins, half brother and sister, or grandparent and grandchild.

ÂOur review of the evidence, DNA findings, statistical analysis, and personal interviews of the experts used in the film clearly show that the claims are largely based on speculation and hype,Â said Don Sausa.

For additional information on the news that is the subject of this release (or for a sample review copy), contact Don Ariel at support(at)thevisionpress.com or visit http://www.JesusTombReview.com. Book distribution date is April 16, 2007, ISBN 0978834690. Author is available for interviews.

Author and speaker, Don Sausa, is a member of the Society of Biblical Literature, an organization that promotes biblical scholarship. He has studied biblical history for over 10 years, and is an ordained elder for the Fort Myers Ortiz Church.