The world's #1 DJ Paul van Dyk is back with the long awaited new original album "In Between," which features a wide range of collaborations including David Byrne of the Talking Heads, Jessica Sutta of the Pussycat Dolls, Ashley Tomberlin from Luminary, Alex M.O.R.P.H, Lo Fi Sugar, Rea Garvey of Reamonn, Ryan Merchant and Wayne Jackson. The first single "White Lies" will be released July 31st.

The world's #1 DJ Paul van Dyk is back with a dynamic new effort that spotlights his incredible talent as a producer and recording artist. On August 14th, Mute will release the long awaited new original album "In Between," which van Dyk feels is his most personal and strongest album to date. The album features a wide range of collaborations including David Byrne of the Talking Heads, Jessica Sutta of the Pussycat Dolls, Ashley Tomberlin from Luminary, Alex M.O.R.P.H, Lo Fi Sugar, Rea Garvey of Reamonn, Ryan Merchant and Wayne Jackson.

The first single "White Lies" will be released July 31st and features vocals from Jessica Sutta of the Pussycat Dolls which confirms van Dyk's cult status as one of the most relevant artists and producers in dance music. "I had a lot of fun working with Jessica. Her lascivious voice and sexy attitude reflects the theme of the single perfectly."

Paul van Dyk's innovation in music production is matched only by the selection of Cuba as the location for the album's artwork. "I've always been a fan of the movie Buena Vista Social Club," van Dyk says. "When I finally got to visit Cuba last year for the first time, I felt so very deeply inspired by its atmosphere and the people, that I wanted to capture some of this feeling with me. This album is very different from what I've done in the past, and so is Cuba it seems. It's a country where time has come to a complete standstill, and yet people seem so very happy."

To kick off the album's official release in the US, Paul will be meeting fans at an in-store appearance at New York's Virgin Megastore in Union Square at 7PM on Tuesday, August 14th. He will also perform for a record fifth consecutive year at New York's Central Park on Friday, August 17th and Saturday, August 18th. On special occasions such as the Central Park performances, Paul will be joined by guest performers from the album [drummer, keyboards, vocalists].

Paul van Dyk received a Grammy nomination in 2005 for Best Dance/Electronic Album for his original album "Reflections" - this marked the first time NARAS recognized this category. His original productions from "Reflections" have been synced into major motion pictures such as Into the Blue, Sisterhood of the Traveling Pants, television's Entertainment Tonight and MTV's Cribs international ad campaigns for Motorola, HBO, Land Rover, and most recently for Jeep this spring. With over 3 million albums sold worldwide, van Dyk travels the equivalent of circling the globe over 16 times each year to sold out performances internationally. With an average of over 130 gigs per year, Paul performs to audiences of over 3 million people yearly. Aside from his musical activity, Paul van Dyk has always dedicated a significant part of his life to politics and social justice: from his youth, when he fled over the Berlin Wall to the West, to his children's charity in India's Mumbai, and his partnership scheme with the German Red Cross to help poor children in Berlin. In 2004, van Dyk was the only electronic artist involved in a nationwide tour with the Rock The Vote campaign, where he joined the likes of Bono, P Diddy, the Black Eyed Peas and George Clinton in campaigning for America's youth to sign up to vote in the presidential election. He most recently received Berlin's Medal of Honor (Landesverdienstorden) in recognition of his work with Ruckenwind, a charity organization he founded dedicated to helping poor children of Berlin.

The complete track listing for "In Between" is as follows: 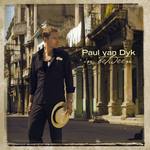