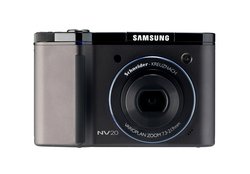 The NV8, NV15 and NV20 represent the next generation of Samsung's award-winning NV series of digital cameras

"The NV8, NV15 and NV20 represent the next generation of Samsung's award-winning NV series of digital cameras," said Stewart Henderson, Vice President Marketing, Samsung Opto-Electronics America. "This is not your typical family of point-and-shoot digital cameras. At Samsung, we take great pride in the NV series because of the firsts that it brings to market, including our revolutionary Smart Touch interface, as well as the WOW factor that makes the cameras stand out from the crowd. Packed to the brim with advanced, innovative features, the NV8, NV15 and NV20 are targeted towards the experienced digital camera owner looking for a step up model that breaks free of the 'me-too' look and feel that many manufacturers often follow," concluded Mr. Henderson.

The NV8, NV15 and NV20 can also shoot at ISO 3200, and boast an improved Advanced Shake Reduction (ASR) feature as well as Samsung's new Auto Contrast Balance (ACB) and Image Noise Reduction modes. ACB automatically adjusts the brightness of subjects composed in harsh lighting, such as those that are back-lit, and the Image Noise Reduction helps limit the amount of noise in captured images, especially those shot at higher ISO settings. No matter what lighting environment shooters find themselves in, they can rest assured that the NV8, NV15 and NV20 will deliver uncompromising results.

All three new cameras feature Samsung's Face Detection technology, which makes taking pictures of family and friends a snap. Samsung's Face Detection feature detects up to nine faces and automatically adjusts focus and exposure to ensure better composition and image quality. Additionally, with 14 scene modes to choose from, including Night, Portrait, Children, Landscape, Close-Up, Text, Sunset, Dawn, Backlight, Fireworks, Beach & Snow, Café, Food, and Self-Shot, shooters can effortlessly adjust the camera and capture the best image possible in any setting. All images can be saved to each of the cameras' 20MB of internal memory or to an external SDHC/SD card with a guaranteed maximum of 8GB.

The NV8, NV15 and NV20 also include a high-resolution movie mode, with the ability to record at VGA resolution (640x480) at a maximum frame rate of 30fps. Shooters can also take advantage of the cameras' movie stabilizers and 3x optical zooms while recording video and with Samsung's Successive Recording mode, can pause, and then resume filming without having to save the clips as individual files.

For full specifications and hi-res images visit the Samsung Camera website at http://www.samsungcamerausa.com.