Juniper Research forecasts that HSPA will dominate mobile broadband network deployments over the next five years, consistently accounting for about 70% of the total mobile broadband subscriber base until 2012. 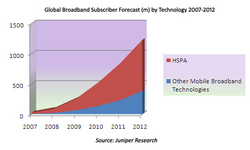 Juniper Research forecasts that HSPA will dominate mobile broadband network deployments over the next five years, consistently accounting for about 70% of the total mobile broadband subscriber base until 2012.

Globally, nearly 1 in 3 mobile subscribers will use a mobile broadband connection by 2012. This will represent over 1Bn users, driven by demand from North America, Western Europe and to a lesser extent by the Far East and China.

However, the main gating issue that will dictate takeup for this technology will be the availability of suitable devices - whether handsets, laptops, datacards, or other types of device such as media players. Mobile broadband will be a device-based technology.

Report author Howard Wilcox said, "HSPA's in-service status in 2007 makes it already the most advanced mobile broadband technology, with many further deployments due in the near and medium term. For the 3G service provider base, HSPA represents a software upgrade rather than a new network investment. HSPA will also benefit from technology 'leap' subscribers in the developing nations, and handset churn elsewhere, with users migrating to HSPA-based broadband as the norm."

Howard Wilcox continued, "Over the last year there has been significant activity in the Mobile WiMAX market, including many trials and contract announcements by leading vendors and operators. Mobile WiMAX is now positioned to achieve a single digit percent proportion of the global mobile broadband subscriber base by 2012. This will represent a significant attainment for this new mobile platform. We believe that the WiMAX market will see substantial growth after 2012, as new networks are built out and new applications are adopted."

Juniper Research assesses the current and future status of mobile broadband based on interviews, case studies and analysis from representatives of some of the leading organisations in the growing mobile broadband industry.

Highlights from the report include: