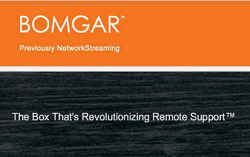 A survey conducted at the National Association of State Chief Information Officers (NASCIO) conference found that increasing IT efficiencies and effectiveness through the adoption of leading practices and emerging technologies is the biggest challenge for state CIOs.

But according to Scott Pattison, executive director of the National Association of State Budget Officers (NASBO), competing fiscal pressures don't leave a lot of money for IT projects. The education sector is one of those hardest hit by this harsh reality, but Minidoka County School District has found a solution in Bomgar's remote desktop support appliance.

Minidoka County School District's three-man IT team is responsible for 700 employees, 3,000 systems and 10 sites throughout Minidoka County. Fixing a problem often required travel across the county, and limited IT resources frequently forced employees to wait for long periods to have their problem solved.

Minidoka used a clientless remote control service for support, but the solution was severely limited. "We were very frustrated with the program," said Technology Supervisor Kent Jackson. "It was a plugin in Internet Explorer. You had to use IE, and if you shut down the browser, you lost your connection. We have a web-enhanced curriculum program with Adobe Flash®, Macromedia Authorware™, and other plugins, and to add those plugins you had to restart the browser, and you lost the connection. You had to have a phone connection with the person on the other end to get them to restart the session when you closed the browser."

When Jackson was introduced to Bomgar™ (then NetworkStreaming) remote desktop support solution, he was impressed. "We had it up and running almost instantly," said Jackson. "Bomgar sent us the box, we plugged it in, and from there we've been running with it." Since they were familiar with other remote support solutions already, zero training was necessary: "We just needed the addresses and login names and we figured it out for ourselves." Because of poor internet quality in the region, deploying the appliance on-site also had a performance advantage for Minidoka. "We like the fact that the appliance could be installed on-site," said Jackson. "We can still do support without having access to our vendor's website."

Unlike the previous solution, Bomgar's remote desktop support solution also enabled Minidoka's tech support team to restart browsers for plugin installation, and to reboot and automatically reconnect to remote computers without customers being available to reinitiate a remote control session.

Using Bomgar, the team has reduced on-site support visits by 98 percent, and resolution of support incidents on the first call has risen by 90 percent. This has increased call handling capacity exponentially: "We went from five issues a day to over 80," said Jackson. Bomgar's remote desktop support solution also saved money: Minidoka realized ROI after only six months.