This fascinating look back at 300 years of puppetry in American arrives on DVD Sept. 18, 2007 from Mazzarella Media. The 58-minute documentary includes interviews and profiles of some of the most beloved puppeteers including Shari Lewis, Paul Winchell and Edgar Bergen. Expanded extras feature rare footage of Tony Sarg's Marionette Shows, Rootie Kazootie and Thomas Edison's "Dancing Chinamen." 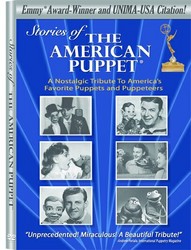 Stories of The American Puppet

Howdy Doody. Charlie McCarthy. Lamb Chop. Kermit. These are some of the most notable names in entertainment. They are some of the most endearing characters, beloved by millions. And they all are puppets. All part of a distinguished and highly cherished art form spanning an incredible 300 years. Now you can discover the fascinating and colorful history of puppetry in America in the engaging documentary "Stories of The American Puppet," available on DVD Sept. 18, 2007 from Mazzarella Media.

Produced and directed by Mark Mazzarella, who also co-wrote the documentary with his brother Tony Mazzarella, "Stories of The American Puppet" originally aired on PBS and won an Emmy® in 2001 for Outstanding Writing. Narrated by Dan Lauria (The Wonder Years), "Stories of The American Puppet" brings the story of American puppetry to life through archival film, rare photographs, historical reenactments, insightful interviews, and in depth profiles of some of the most influential puppeteers of the 20th century, including Jim Henson, Shari Lewis, Paul Winchell and Edgar Bergen. Suggested retail price for the 58-minute DVD is $19.95.

"The art of puppetry has made a huge impact on American entertainment and our cultural heritage," said Mark Mazzarella, the brainchild behind the project. "But people also need to know that there's an artistry and special talent involved from designing puppets and conceptualizing their personalities, to manipulation of their movements and to storylines that are unique to the puppets' personalities. That's what 'Stories of The American Puppet' is all about."

This expansive documentary chronicles puppetry evolution from the 18th-century street puppets Punch and Joan (later better known as Punch and Judy) to the 20th-century Muppets, highlighting many of the puppeteer masters and classic characters that have shaped American culture. The film beautifully illustrates the passion behind the art of puppetry and how the masters of the craft have constantly and fervently striven to raise the level of performance and create a truly iconic theatrical experience.

Beloved ventriloquist, puppeteer, performer and host of her own television shows and award-winning videos, Shari Lewis, gives her last interview and shares her belief that "You can only really bring to life a puppet that is a facet of you. You have to let the puppet tell you if it wants to talk. Maybe the answer to longevity is the truth of the character." Lewis, who passed away in 1998, created some of the most well known and loved puppet characters including Lamb Chop, Charlie Horse and Hush Puppy.

"Jim felt he could reach people in a very universal way," reminisces interviewee Jane Henson about her late husband's work with modern puppetry. "He wanted to be someone who made a difference."

"We are delighted to present many of the performances in their entirety on the bonus extras section of the DVD," said Mazzarella.

About Mazzarella Media
Mazzarella Media (http://www.mazz.com) is an Emmy award-winning company that develops products to foster the fun and excitement of learning. Their products are designed to get kids thinking about themselves and the world around them and to enhance intellectual, social, emotional and physical growth by stimulating the imagination, nurturing creativity and developing a love for learning. The company has released a multitude of programs including the multi-awarding-winning children's Monkeydoos fitness DVD series, Potty Power!, which teaches children potty training in an engaging musical format; and several titles in the Thinkeroo line of science programs including Spacetrekkers, Rock Finders and Bio Trackers. Their educational division recently released Exploring Our Past: Native Peoples of North America, an engrossing five-part DVD series narrated by Grammy® award-winning singer-songwriter Joanne Shenandoah, which introduces young viewers to the many Native American tribes that have lived in the vastly diverse regions of the country.

Extras on "Stories of The American Puppet" DVD include expanded footage of these performances: