Norfolk based Newman Concepts, the UK's Wireless backbone pioneer, has slipped into administration. Newman Concepts failed to complete its current round of funding and is currently seeking to shore up its finances. 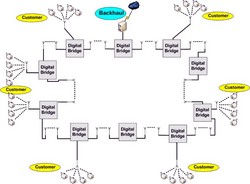 We are seeking a decisive buyer who can put Newman Concepts back on track with the minimum of disruption. There is a loyal team at NCL who are ready to assist in the financial realisation of this technology.

Newman Concepts Ltd, whose patent for a high speed wireless backbone, was recently published, has failed to complete its anticipated funding deal.

The NCL patent demonstrates the cost effective construction of a wireless backbone formed from low cost components. End user access points are isolated from the backbone and therefore do not interfere with or degrade network performance.

The NCL development platform is a 30 Kilometre live rural network that has been refined over the last four years. The network serves around 200 users and has a 20mb backhaul. NCL has demonstrated 2ms (or less) latency over nodes that can be up to 7 Kilometres apart. End to end the network can achieve a 15 milliseconds return time for a packet to go from one end of the network to the other and back

Whilst the NCL system can be used to construct low cost high performance wireless networks it is also suitable for upgrading existing wireless networks that follow the "Mesh" design system. http://www.newmanconcepts.co.uk

Many wide area wireless networks have failed to deliver the promised performance and the NCL patent pending system can resolve these issues.

Whilst improving these networks NCL can usually reduce the number of internet backhauls required and save the client considerable ongoing costs.

Early this year NCL entered negotiations to receive up to $5m of funding that was due to complete in September. Despite being no fault of Newman Concepts Ltd the deal did not complete and NCL has sought the help of administrator Stephen Katz of Fisher Partners, London.

Stephen Katz commented "The NCL financial planning was geared to a funding deal that appeared to be completing even if it was later than expected. Once it was confirmed that the funding was not available NCL was left in a very difficult financial position and sought our protection. We are now seeking a buyer or a partner for NCL that can take the company forward".

In order to find a solution to the NCL funding crisis Fisher Partners have instructed Michael Charles of Amco Agency Ltd to seek out interested parties.

Michael Charles said: "Amco has considerable experience dealing with companies whose major asset is its IPR. We can see that NCL is no longer a concept company. NCL can prove its technology works as it operates a full implementation 24/7 with up to 200 users. This test bed has enabled them to develop software to manage, control and add security in a real world environment"

"We are seeking a decisive buyer who can put Newman Concepts back on track with the minimum of disruption. There is a loyal team at NCL who are ready to assist in the financial realisation of this technology."

About: Amco Agency
Amco Agency Ltd are London based asset valuers and have provided valuation and agency services to insolvency practitioners since 1991. Our experience and knowledge spans valuations for most types of assets including IPR. Contact: Michael Charles 08452 300700

About: Fisher Partners
Fisher Partners is the specialist insolvency division of H W Fisher & Company based in London. It comprises five licensed insolvency practitioners and is active in all areas of insolvency. Contact: Stephen Katz 020 7380 4903