Simultaneously Captured Moment on Earth Released as a DVDBook

The first installment in Satellite Films' series, "A Moment on Earth" has been released as a DVDBook, available exclusively through their website at http://www.momentonearth.com. The DVDBook allows its audience to relive the grassroots global effort as 60 filmmakers in over 40 countries and on all 7 continents worked together to capture a simultaneous Moment on Earth. 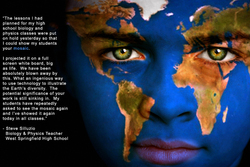 The first installment in Satellite Films' series, "A Moment on Earth" has been released as a DVDBook, available exclusively through their website. The DVDBook allows its audience to relive the grassroots global effort as 60 filmmakers in over 40 countries and on all 7 continents worked together to capture a simultaneous Moment on Earth.

The DVDBook, is divided into three primary sections - 'Before the Moment,' 'The Moment,' and 'After the Moment.' As the audience reads 'Before the Moment' a countdown drops as the Moment nears and email correspondence flies around the world. In the process, the audience gets a unique view of the planet as the filmmakers - all locals - wrestle against time to decide where to point their cameras and uncover just what makes their home on Earth most special.

"Uzbekistan has been in the heart of all ancient trade routes - 'Great Silk Road' - for thousands of years and TRADE is in the heart of almost every person living in this land," wrote Shavkat Karimov of Tashkent.

Halfway through the book as the countdown reaches zero and the Moment arrives, the reader is instructed to pull out the DVD embedded elegantly in the back of the hard-bound cover. They then can watch 'The Moment' and all the special features before returning to the book to read 'After the Moment,' which commences as soon as the first filmmaker returns from capturing their moment and tells of the unexpected trials and adventure.

"And then I just realized, that was the moment actually that was presenting itself, in my eyes without my planning it. I said to myself, if there is a moment on Earth within Rwanda where I am - this is it - and then I filmed it," recalled Eric Kabera of Kigali, Rwanda.

In addition to exploring the diversity and simultaneity of life on Earth, the project pushes to the edge of even larger questions. "It's too big of an idea…to really wrap your brain around," says Orson Robbins-Pianka of New York City. Like the film itself, the method of distribution is somewhat experimental. You can see pictures of the DVDBook as well as a Top 10 Reasons to Buy list in the A Moment on Earth Bazaar.

As to the concept of capturing a simultaneous moment and the projects connections to time, A Moment on Earth filmmaker Miguel Del Valle of Mexico City, Mexico adds: "Time is an invention. It does not exist."

About A Moment on Earth:
On August 5th, 2004 at 12:00pm GMT, 60 filmmakers in over forty countries across all seven continents captured a single Moment on Earth. Coordinated by Satellite Films, each camera operator focused on the life of a unique individual. Planned according to respective time zones so that everyone would be shooting at the same instant, the camera operators were instructed to film a "hero" of their choosing - capturing their life as they would live it on any day. 12 hours after the first moment, they shot again, capturing the second part in the on-going series.

In the spring of 2007, an online interactive mosaic made with 3192 still images captured from footage from the first film in the series, became an Official Honoree of the 2007 Webby Awards.

To learn more about Satellite Films, read about the film team, see production photos, watch the trailers and more, go to http://www.momentonearth.com