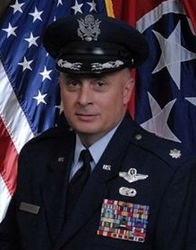 Mr. Childers held numerous positions in the U.S. Air Force (USAF) and Air National Guard (ANG) during his 32-year career. Prior to his retirement, he served fulltime with the 118th Airlift Wing of the Tennessee Air National Guard as an active-duty Navigator Instructor/Evaluator for 27 years. He has nearly 5,000 hours in the C-130A, C-130E and C-130H aircraft. He held an active-duty full-time officer position with the Guard and earlier while enlisted in the USAF. In addition to his duties as a crewmember flying the C-130, he served as Chief of the Command Post and earlier as Chief of Current Operations. He was the senior advisor to the Wing Commander for Operational Reporting (OPREP) of significant events or incidents involving Contingency Operations, significant peacetime events, and state emergency situations. While advising the commander on reporting requirements, he also categorized events to determine the level of notification required. He prepared, determined level of precedence, numbered, recorded, and released reports via classified and unclassified means. Additionally, he dictated which methodology and systems were to be used in tracking aircraft mission movement, and selected and submitted numerous mission movement reports in support of wing and Higher Headquarters tasking.

Colonel Childers served distinguishably, deploying to Southwest Asia during Operation DESERT SHIELD, twice to Saudi Arabia and later in Oman in support of Operation SOUTHERN WATCH. He has deployed numerous times to Europe in support of Operations' PROVIDE PROMISE, JOINT ENDEAVOR and JOINT GUARD, flying critical missions in Germany, Italy, Romania, Bosnia and other surrounding countries in southern Europe, northern Africa and the Middle East. His other notable deployments include Operations' CORONET OAK and VOLANT OAK supporting missions to Central and South America, as well as Operation VOLANT PINE out of England. He also supported the units' involvement in Operation NOBLE EAGLE by managing the Command Post's 24-hour mission for nearly three years, while continuing to fly the C-130.

Since September 2001, until his retirement today, he managed the Wing's Command Post and as Chief, recently received Air Mobility Command's (AMC) highest "Outstanding" rating during an Inspector General (IG) Unit Compliance Inspection. His Command Post was the first AMC gained Guard Command Post to receive this distinguished rating and was personally commended by the AMC IG, a two-star Major General. He has held a Top Secret security clearance since 1976.

Childers joins Desktop today upon his retirement from military duty. Mr. Childers holds a position on the staff of the "National Guard Association of Tennessee, (NGAT)" as a "Unit Benefits Advisor". He is also Treasurer of the local "Major General Dan F. Callahan" Chapter of the Air Force Association (AFA) and Chairman of the "Nominating Committee" for the Board of Directors of the US Community Credit Union in Nashville, Tennessee.

"Bringing Tim on board allows Desktop to further strengthen our roots in the military community," commented Howard Ryan, president and CEO of Desktop Alert. "As we build and market network-centric emergency alerting systems to the DoD, it's incredibly valuable to have the perspective of a career military professional who has first-hand experience implementing systems in the defense environment. We're honored and excited to have Tim as a member of our team and about the experience and enthusiasm he brings."

When describing his reasons for joining the Desktop team, Childers stated, "Having spent my entire military career at the Wing or Squadron level, I have seen first hand what it takes to operate and manage an operational unit and I understand the needs of a front-line organization at this level. From my varied experiences in the communications field, base operations and flying operations to management of flight and mission scheduling and most recently in Command and Control, I know the value of accurate and timely notification during routine and emergency situations." Childers adds: "Having seen Desktop Alert's capability demonstrated and realizing how this type of technology would've enhanced my job in Base Operations and the Command Post, I became excited in the product, the company and management team leading it. That's why I am honored to become a part of the team."

Mr. Childers's military career began in 1975 when he enlisted in the U.S. Air Force and served as a Cryptologist Tempest Technician with the 6906 Security Squadron, USAF Security Service until 1978 when he transferred to the Tennessee Air National Guard while enrolling in college. Initially in the Guard, he was hired as a communications equipment repairman, but later cross-trained as a radio operator working in the Military Affiliate Radio Station (MARS) section with the 118th Communications Flight. Later, he earned his commission as a Second Lieutenant, graduating from the Academy of Military Science, Knoxville, Tennessee in 1980. He earned his wings in 1981, trained to fly the C-130 aircraft, and proudly flew with the 118AW's 105th Airlift Squadron for the remainder of his career. Prior to assuming his last duty position, he served as Chief of Wing Current Operations, Assistant Squadron Flight Commander, Wing Standardization / Evaluation, and Wing Command Post Controller. He graduated from Squadron Officer School and Air Command and Staff College via correspondence and presently enrolled in Air War College. He earned his Bachelor of Science Degree in Aerospace Technology from Middle Tennessee State University (MTSU) in 1982, with an Emphasis in Aerospace Administration with a minor in Management & Marketing.