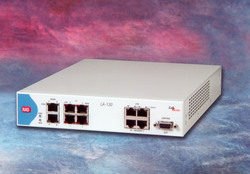 With the LA-130, we have provided operators with an ingenious way to further reduce costs by introducing cellular backhaul over affordable and ubiquitous DSL links

RAD Data Communications and its LA-130 DSL cell-site gateway have won the GSM Association's 2008 Global Mobile Award for "Best Network Quality Initiative." The award was presented on February 13 in Barcelona, at a special Mobile World Congress ceremony that was held by the GSMA, the global trade association representing over 700 GSM mobile operators across 218 countries.

RAD's LA-130 was chosen by a select panel of judges, in recognition of its innovative delivery of on-demand service quality - a mandatory requirement by today's astute mobile consumers. Part of RAD's full range of multiservice RAN gateways, the LA-130 is the first mobile backhaul solution that combines standardized pseudowire emulation capabilities with xDSL and packet transport support, in the same device. It allows operators to ensure the highest level of service quality for real-time voice, video and data transmissions, while converging 2G, 3G and bandwidth-intensive mobile broadband traffic, over low-cost packet transport and wholesale DSL links.

Pioneer of Innovative Backhaul Strategies:
"This award is an acknowledgement of RAD's contribution to the definition of the new mobile backhaul landscape," stated Gaby Junowicz, RAD's Director of Product Management and Business Development. "Pseudowire technology, for example, which was first introduced to the market by RAD nearly a decade ago, is today the de-facto standard for backhauling multiple generations of mobile traffic over Ethernet, MPLS and IP transport networks, enabling operators to reduce expenses by co-locating 2G, 3G and 4G infrastructure at the same base station," he explained. "With the LA-130, we have provided operators with an ingenious way to further reduce costs by introducing cellular backhaul over affordable and ubiquitous DSL links," Junowicz concluded. "Our Tier 1 partners that have deployed these solutions are the best proof that RAD will continue to lead the industry in paving the way to tomorrow's all-IP radio access infrastructure."

About the GSMA:
The GSM Association (GSMA) is the global trade association representing more than 700 GSM mobile phone operators across 218 countries and territories of the world. In addition, more than 200 manufacturers and suppliers support the Association's initiatives as key partners. The primary goals of the GSMA are to ensure mobile phones and wireless services work globally and are easily accessible, enhancing their value to individual customers and national economies, while creating new business opportunities for operators and their suppliers. The Association's members serve more than 2.5 billion customers - 82% of the world's mobile phone users.

About RAD:
Established in 1981, privately owned RAD Data Communications has achieved international recognition as a major manufacturer of high quality access equipment for data communications and telecommunications applications. These solutions serve the data and voice access requirements of service providers, incumbent and new carriers, and enterprise networks, by reducing infrastructure investment costs while boosting competitiveness and profitability. The company's installed base exceeds 10,000,000 units and includes more than 150 carriers and operators around the world. These customers are supported by 23 RAD offices and more than 300 channel partners in 164 countries.

RAD is a member of the RAD Group of companies, a world leader in networking and internetworking product solutions.