Danish composer Torben Thoger has commissioned U.S.-based new age music expert Suzanne Doucet of Only New Age Music to oversee the first-time release of his catalog to the U.S. market. 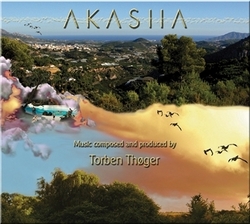 AKASHA is now releasing in the U.S.

DJBFA - The Danish Society for Songwriters and Composers.

Danish composer Torben Thoger has commissioned U.S.-based new age music consultant Suzanne Doucet of Only New Age Music to oversee the first-time release of his catalog to the U.S. market. The first album, AKASHA, is his latest, and is inspired by the ancient Akashic Records; two additional albums -- The Present and Harmony -- will be released in the U.S. in latter 2008. Doucet will manage campaigns for marketing, public relations, new age radio, special markets and distribution on Thoger's behalf in the United States.

Thoger will also celebrate the release of AKASHA with a CD giveaway contest for fans on his website. AKASHA's uplifting blend of audio visions includes lush compositions and exotic live performances, occasionally accented with heavenly vocals. It is an adventure in active listening and musical storytelling for modern New Age fans, incorporating elements of symphonic rock and chill out music throughout the traditional compositions. Although not composed with this in mind, keen listeners might imagine the succession of tracks as a journey of soul mates seeking one another, finding, loving, dancing and, finally, returning to oneness, as AKASHA culminates with a breathtaking IAO chant.

Torben Thoger consults modern-day seers to assist him on his musical path, explaining, "The Akashic Record contains the most important and vital information about our soul's purpose and journeys in the past, in this lifetime, and it can provide a guide for the future. We all share fundamental ideas and consciousness. Whenever we are inspired or feel intuitive, it all comes from the AKASHA energy that surrounds us. This CD comes from my heart -- and AKASHA."

AKASHA, a word which comes from the 5000 year old Sanskrit language, is known (in esoteric circles) as the ethereal non-visible energy, the first of the five elements of which the physical universe is composed (AKASHA, air, fire, water and earth). Every thought, word and deed from each lifetime in our past, along with every event in which we participated, is recorded in the universal memory called the Akashic Record.

The music on the albums and tracks is composed, arranged and produced by Torben Thoger, and he performs and programs most of the instruments and effects himself. Torben collaborates with international artists like Pepe Bornay, who adds spice with Spanish guitar, rhythm guitar and Latin American instruments on the albums The Present and AKASHA. Cuban musician Armando García Fernández plays the haunting solo violin parts on those albums as well. The choir from the stagegroup Teatro del Sol from La Nucia, Alicante, Spain sings the mesmerizing IAO chant on AKASHA, directed by Rob Barendsma.

"New Age Music is truly international, as we can experience with Danish film composer Torben Thoger. His style is influenced by different cultures and styles and he blends classical, world and pop elements into a tapestry of colorful, relaxing and soothing soundscapes. His music moves through various New Age styles and will appeal to many different audiences," predicts New Age music pioneer Suzanne Doucet, principal of Only New Age Music. "This album reminds us that, ultimately, it is not a singular style that makes music New Age - it is the underlying Spirit and effect the music has on the listener."

If you enjoy music by Yanni, Vangelis, Ottmar Liebart, Steve and David Gordon, Tangerine Dream, David Arkenstone, Manheim Steamroller, Chris Spheeris, Michael Hoppe, Omar Akram or Ray, then you will want to experience Torben Thoger's music. His fans may be inspired to invent a few new terms for his music, such as Integrated New Age or Holistic New Age.

Ultimately, AKASHA is a "mature" holistic new age album in the sense that by integrating different styles, it reflects all facets of life in a transformational way; for instance, once one explores different "spiritual paths" in life, they return as a whole "integrated" person. Torben never stays with one pattern or concept, as if to say, once one has tried all formulas, there is no longer a need to isolate with one formula. His music is, like us, constantly changing; as it is in life!

Torben Thoger's albums AKASHA, The Present and Harmony are available in music stores, new age stores and online at Amazon.com, CDBaby.com, iTunes and others, in both CD and downloadable formats. One can visit Torben's website at http://www.camcom.dk for more information.

About Torben Thoger:
Torben Thoger produces his music from studio facilities at his home in Torup on the Danish isle of Samso, and in Callosa den Sariá, Alicante, Spain. He is a professional composer, and the proprietor of Camelot Communication, a Danish company creating and producing music, film, multimedia and arts. Thoger is a member of "DJBFA - The Danish Society for Songwriters and Composers."

About Suzanne Doucet:
Suzanne Doucet is widely regarded as a pioneer of the New Age music genre, and an expert consultant in her field. She works with both labels and independent artists to aid in the development, marketing and distribution of new music; she also produces multimedia entertainment projects. For more about Suzanne Doucet and Only New Age Music Inc., go to http://www.newagemusic.com.

Torben Thoger in the Studio