Oscar Scoop! The Woman in the Green Dress Identified 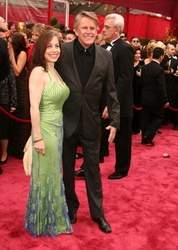 Mary L. Couture, and jewelry from my own private collection!

The 80th Annual Academy Awards, viewed by hundreds of millions of cinema lovers, is the most watched awards ceremony of its kind. On February 24, 2008 the Academy Awards welcomed invited guests, including Academy Award nominee, Gary Busey (The Buddy Holly Story), accompanied by his long-time attorney and well-known figure in the entertainment industry, Vicki Roberts.

Known by many as the "woman in the green dress," Vicki Roberts was on hand to witness up close and personal the most exciting red carpet moment of the evening, which included Mr. Busey's gracious greeting of Academy Award nominee, Laura Linney (The Savages), and awkward exchange with Ryan Seacrest (American Idol) and presenter, Jennifer Garner (Juno). On the now legendary videotape, Vicki Roberts is seen exchanging greetings with Garner and is then introduced to Seacrest by Gary Busey.

Recognized for her roles in the film, Being Michael Madsen, and the nationally syndicated television show,Jury Duty, legal eagle and actress Vicki Roberts commented on her observation of the uncomfortable encounter between Garner and Busey.

"Gary greeted everyone with joy and enthusiasm and goodness in his heart," reported Ms. Roberts. "The characterization that he allegedly accosted anyone on the red carpet is belied by the tape. It is unfortunate that the incident is being reported unfairly and unjustly in some segments of the media and contrary to the clear evidence presented by the videotape."

On the red carpet Busey and Roberts were met with open arms from some of Hollywood's most household names, such as George Clooney, Tommy Lee Jones, Daniel Day Lewis, and actress, singer and songwriter, Miley Cyrus. The duo chatted during the pre-Oscar event with many of their peers and media outlets before heading into the awards show. America's fashion consultant, Tim Gunn (Project Runway, Tim Gunn's Guide to Style) asked Vicki the famous question of the night: "Who are you wearing?" With her typical low-key and sometimes Woody Allenesque humor and sharp wit, she silently applauded herself for checking the label before donning her gown, and happily replied, "Mary L. Couture, and jewelry from my own private collection!" Tim Gunn graciously smiled. Roberts knew what that meant!

Inside the theatre and after the show Gary introduced Vicki to more of his friends, including Jack Nicholson, John Travolta, Harrison Ford, and Johnny Depp.

"This was the second time I attended the Oscars with Gary, and as usual, the Academy graciously placed us in prime orchestra seats. In fact," Roberts chuckled, "I was seated directly in front of the teleprompter, so it felt as if each of the presenters was speaking directly to me!"

After the conclusion of the Oscars, Vicki and Gary were invited to attend the 9th annual awards after-party dinner benefiting Children Uniting Nations at the Beverly Hilton Hotel. Vicki is again seen on the second noteworthy videotape of the night featuring Gary's interview with an eleven year old girl. On the red carpet, Ms. Roberts rubbed elbows with many of the dancers from ABC's primetime Emmy award-nominated show, Dancing with the Stars. She and Gary spent the balance of the evening in the VIP area with Academy Award winner, Martin Landau (Ed Wood).

By midnight, however, word about the Oscars red carpet episode was circulating internationally as the "best red carpet moment of the evening." Gary Busey's segment was viral on the Internet, and everyone was tuning in to see Busey and "the woman in the green dress" stop by to greet Seacrest on the carpet. Since then, the clip has been showcased on E!, Geraldo at Large, TV Guide, and EXTRA, and YouTube. The popular clip surpasses the well-received interview Vicki and Gary gave to Lisa Rinna for TVGuide.com on the Oscars red carpet immediately prior to the Seacrest exchange, which also went viral on the web.

The dynamic duo continues to garner interest from the incident, and the public commentary is overwhelmingly favorable. And now, the woman in the green dress has officially been identified as celebrity attorney, author, and actress Vicki Roberts, with a full roster of her own entertainment credits. Ms. Roberts is currently in development with her new show for television that promises to bring a unique and humorous twist to the genre of courtroom drama. In the meantime, Ms. Roberts intends on donating her now familiar Academy Award gown to the renowned celebrity charity, Clothes Off Our Back. For more information on Vicki Roberts, please visit her website http://www.restmycase.com , and the Internet Movie Data Base.