California Foreclosure Activity Up 38 Percent in First Quarter of 2008

RealtyStore.com, the nation's leading provider of foreclosure listings, released its quarterly California Foreclosure Report showing a 38% increase in default notices for Q1 2008. Default notices in California are the highest they have been in over 15 years. The housing market will continue to deteriorate as home prices decline and adjustable mortgages reset. 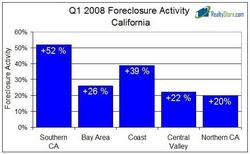 The RealtyStore Quarterly California Foreclosure Report covers all counties and provides the total number of Notices of Default (NODs) statewide.

RealtyStore recorded 116,644 Notices of Default (NODs) statewide for Q1 2008. This was a 38% jump from those recorded in Q4 2007. An NOD is filed by the lending institution when a homeowner falls behind on mortgage payments. When analyzed regionally, NODs provide important information about which homeowners have home loans they cannot afford. California was subdivided into five regions: Southern California, the Bay Area, the Central Coast, the Central Valley and Northern California. All regions encountered double digit increases in Q1 defaults. Southern California (+ 52%), the Bay Area (+26%) and the Central Coast (+39%) were the hardest hit by the foreclosure crisis.

"California NODs are at the "highest levels we have seen in over 15 years". Unfortunately, we expect the housing market to continue to deteriorate, as adjustable rate mortgages reset and home prices decline," said Tim Chin, CEO of RealtyStore. "A year ago, roughly 70% of homeowners in default were able to bring their payments current by refinancing or selling their homes. Due to a slow housing market and tighter mortgage lending standards, this is no longer the case."

Bay Area
The Bay Area started off the year with 16,201 Q1 defaults, an increase of 26% over Q4 of last year. San Mateo, Santa Clara and Marin Counties showed the highest percent increases at 44%, 43% and 39% respectively. Homeowners in Santa Clara County, also known as Silicon Valley, are feeling the pinch as home prices decline, making it more difficult to refinance. Additionally, the growing glut of inventory found in the Bay Area is compounding the problem, as distressed homeowners can no longer quickly unload their property to avoid foreclosure.

Central Coast
The Central Coast also experienced a tremendous up-tick in defaults, surging 39% from Q4. The Central Coast saw 2,349 defaults during Q4, while Q1 jumped to 3,261 defaults. Santa Barbara County was hardest hit, with a 48% increase from the prior quarter.

Northern California
While the total volume of defaults reported throughout Northern California was relatively low compared to other regions, the percent increases for three out of fifteen counties were noteworthy. Trinity, Siskiyou, and Del Norte Counties experienced triple digit growth in defaults at 227%, 126% and 122% respectively.