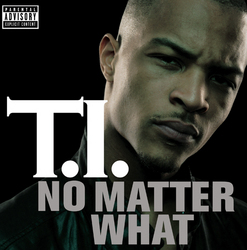 T.I No Matter What

hear my resilience; hear my diligence to overcome any and all obstacles. I hope they know it ain't over like some thought. I'm far from finished and all but done.

On Tuesday, April 29, 2008, Grammy Award Winning Rapper/Actor T.I., will release a single from his highly anticipated album, "Paper Trail" on Hip-Hop Social Network StreetCred.com. The song will be digitally streamed across the network to more than 185 countries and territories. It will be released April 29, 2008 at 7 a.m. ET on StreetCred.com

T.I.'s release is a historic event as it marks the first time a major Hip-Hop artist has released a single on a social network. This allows T.I. to the ability to harness the power of new media while releasing his single seamlessly.

The song can be accessed at http://www.streetcred.com. Media outlets, which stream the song, from StreetCred.com, must provide mandatory on air credit to "StreedCred.com".

So what can fans expect from the new track, "No Matter What"? While T.I. says we'll have to wait a little longer for his next banging club hit, he does want fans to "hear my resilience; hear my diligence to overcome any and all obstacles. I hope they know it ain't over like some thought. I'm far from finished and all but done."

About StreetCred.com:
StreetCred.com is a social network for the Hip-Hop culture that offers interactive connections between Hip-hop celebrities and web users. Subscribers are able to access chat, personal profiles, videos, photos, music, blogs, as well as upload user generated content and more. StreetCred.com, which was launched in July of 2007, is headquartered in Atlanta, Ga.

As of April 2008 StreetCred.com has more than 1.4 million unique users and web traffic from more than 185 countries and territories worldwide.