World's FIRST energy drink distribution with a sanetary seal atop the can. 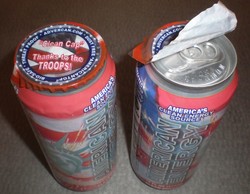 American Energy drink with a

This lemon-lime tasting energy blast is intended to entice your taste buds at the same time the can-top-label delivers a clean, safe drinking experience

The team at American Energy Drink has just completed a whirlwind sampling tour of local Atlanta convenience stores. http://www.americanenergydrink.com "We had to wave our American Energy flag to get noticed by the all American branding guys at the Coke Plaza," says American Energy girls, Stephanie and Jessica. Exxon, Shell, BP, Citgo, Publix, Gulf, QT, and Texaco all have received free tasty samples as the drinks were distributed around downtown Atlanta.

The red-white-blue patriotic cans are capped with Advercan's sanitary can-top-label. This label protects consumers from dirt and germs on top of the can, all while distributing can-top-messages for the retailer. The American Energy crew also donated many drinks to the Georgia V.A. hospital with a can-top-label reading 'Thanks to the Troops!". A retail example for can-top-media could be Exxon Fuel specials, Sony pictures, or Georgia lottery advertisements capping each can. We've all wiped off the tops of a can before, so why not have a seal over it? It seems to me that everything has a protective wrapper except a soda can. Who knows what touches the can before you place it on your lips! The Advercan-3M "Clean Cap" achieved favorable notice at Coca Cola's 2007 innovation conference with the help of Graphic Packaging Inc. http://www.graphicpkg.com , however the world's largest beverage bear hasn't engaged the clean canning system as of yet.

The team claims the American Energy Drink will be seen as a main stream ALL American beverage, whereas most other energy offerings are marketed as extreme. "This lemon-lime tasting energy blast is intended to entice your taste buds at the same time the can-top-label delivers a clean, safe drinking experience", says the founder of both Advercan and American Energy Drink brands, K Mac McClintock. He goes on to say, "To aid in the patriotic branding efforts, there's American Airlines, American idol, American Energy in the news, American Express, American politics, American Red Cross, American military bases, and American flags waiving everywhere as subliminal advertising for the new patriotic drink...now that's a sure brand winner for any major cola company to run with!"

Team Advercan is anticipating a co-production deal or model adoption by one of the mammoth BevCos this year. See http://www.ADVERCAN.com for these, and other beverage industry innovations.

Peel to Reveal a clean can top