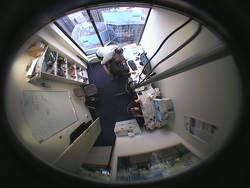 in order to detect perimeter intrusions and threatening behaviours, manage traffic and crowds, to track interactions between individuals and to be able to rapidly reconstruct the sequence of events in the case of an incident.

ImmerVision, the expert in 360° Panoramic Imaging Technology and inventor of the IMV1-1/3 panomorph lens, reports that a growing number of small and large organizations are adding ImmerVision's 360-degree optics to complement their existing video surveillance installations. These companies already use numerous fixed and PTZ cameras to capture quality images of individuals entering their premises, however, they still can't relate events and people in one single coherent view.

Panomorph optics provides consistent 360-degree viewing, live or playback, of an entire area -- critical in the banking, gaming, retailing, petroleum, public transit, manufacturing and government sectors. "Video surveillance "blindness" is dangerous and costly," said Yves Messier, ImmerVision Vice-President Video Surveillance Applications. "End-users are demanding to "see everything, anywhere, at anytime" in order to detect perimeter intrusions and threatening behaviours, manage traffic and crowds, to track interactions between individuals and to be able to rapidly reconstruct the sequence of events in the case of an incident."

Security experts and end-users can find superior 360° performance and compatibility within a growing number of ImmerVision Enables' DVR/NVR/VMS from manufacturers such as Aimetis, Chubb, Cieffe (A March Network Company), Petards, Salient Systems, Sentry 360, Silicor, Stanley, and Verex. ImmerVision prides itself on the quality and reliability of its Panomorph lenses and continuously tests new cameras from a number of leading manufacturers. Some of the qualified cameras that meet the IMV1-1/3 requirements are available from Axis, Bosch, IQinvision, Panasonic and Pelco.

About ImmerVision:
ImmerVision's revolutionary Panomorph technology is the recipient of the 2007 Frost & Sullivan Award for North American Technology Innovation of the Year. Under the leadership of Pascale Nini, President and CEO, ImmerVision has a mission to "invent and bring panoramic technologies to the world." ImmerVision develops Panomorph optics and software algorithms to enable panoramic functionalities for any video device application used for security, video conferencing, consumer electronics, automotive, medical, aerospace and defence. To date, ImmerVision has established six (6) worldwide patents for its visionary panomorph optics technology and software. ImmerVision is based in Montreal, Canada. For more details http://www.immervision.com