Bush Missing Iraq WMD has Been Found in Iraq and One Million U.S. Soldiers are its Victims

No Weapons of Mass Destruction (WMD) that Bush told us were in Iraq were found. Today, to the tragedy of over one million U.S. soldiers and countless innocent Iraqi civilians, there is a Weapon of Mass Destruction in Iraq. That weapon is the deadly radioactive Depleted Uranium (DU) that is used by the U.S. military. 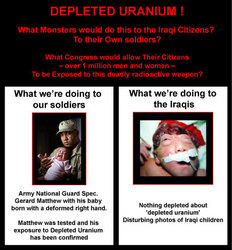 brought home as soon and as safely as possible

Author Paul J. Landis has completed an enhanced web site and the new "Tribune Gazette" to support updates and an updated title to his book "A Real 9/11 Commission," all of which provide dramatic evidence and information about the on-going tragic threat to over one million U.S. soldiers and innocent Iraqi civilians: the radioactive Weapon of Mass Destruction - Depleted Uranium (DU).

There is significant new information and additional content covering a number of critical current issues, Landis told us, thus justifying the new title "A Real 9/11 Commission Will Help Free America, Now" (ISBN 0-9760408-2-4, April 2007; US $14.75, UK, £ 9.85.) The "Tribune Gazette" has been designed to provide an affordable newspaper format and mirrors the topics covered in the updated book and web site, http://www.wethepeoplewethemedia.com, all available now.

In the book, web site and Tribune Gazette, Landis explains, the issue of Depleted Uranium use by our military is put in the context of the 'illegal' Iraq War. For example, In 2005 the ASMFE recognized the illegality of the Iraq war and called for a 'rapid return' of our troops. See note 1 below. As stated in the 2008 AFSME Resolution 85, Bush made "false claims" about the presence of Weapons of Mass destruction (WMD) being in Iraq. See note 2 below. This 2008 Res 85 re-affirms the concerns and that our troops be "brought home as soon and as safely as possible". As the illegal Iraq War continues, billions of dollars that could be used for U.S. infrastructure enhancements, education, housing and medical services for Americans are lost.

Also, Landis continues, the book, web site and "Tribune Gazette" develop a theme based upon the question: Is there a "New Iron Curtain Around the USA, A media Iron Curtain". As evidence of this "New Iron Curtain": How many Americans have been informed by our 'mainstream' media of 1) what is DU and what are the consequences of its use by the military, 2) informed about its use in Iraq and 3) informed that over one million U.S. soldiers and countless innocent Iraqi civilians, have been exposed to it and 4) one of the results of exposure to DU is the births of deformed babies, U.S. babies as well as Iraqi babies?

The pictures with this article graphically show that Depleted Uranium is a lethal, unconscionable, radioactive weapon and the extent to which it has and will continue to cause illnesses and the loss of life should be unacceptable.

Of the use of Depleted Uranium by our military, Dave Lindorff reports in his "Radioactive Wounds of War":
"U.S. forces first used DU in the 1991 Gulf War, when some 300 tons of depleted uranium--the waste product of nuclear power plants and weapons facilities--were used in tank shells and shells fired by A-10 jets. A lesser amount was deployed by U.S. and NATO forces during the Balkans conflict. But in the current wars in Afghanistan and, especially, Iraq, DU has become the weapon of choice, with more than 1,000 tons used in Afghanistan and more than 3,000 tons used in Iraq. And while DU was fired mostly in the desert during the Gulf War, in the current war in Iraq, most of DU munitions are exploding in populated urban areas." See note 3 below.

While most of us may not have the background to understand what the implications of 360 tons vs. 10 tons of DU is, we can grasp the clear message that 3000 tons of DU as reported above by Dave Lindorff and that the "DU munitions are exploding in populated urban areas" is a catastrophe.

HAVE DU WILL TRAVEL is the cover of the March 2006 edition of The Lone Star Iconoclast featuring a series of excellent articles about DU. See note 4 below.

In this edition in the interview of Leon Smith, Editor-in chief of The Lone Star Iconoclast, Schwartz states "They have exposed close to a million of our troops.". That was in March 2006.

In the same interview Schwartz tells us "They put 425,000 Americans in Desert Storm and over 300,000 of them are having medical disability issues." And "The Canadians told me, "Oh, for the record, the reason we didn't go to Iraq is we are already seeing some huge health issues on the Canadian troops that participated in Desert Storm, Bosnia, and Afghanistan. We're not going to be exposing our folks to this stuff anymore. We're against it." Now, they're coming to grips in their own country with some very real and very tragic health stories, and our government is sitting on it." See note 4 below, page 15

The implications of these numbers are numbing: there is huge potential of many Iraq War vets ill and dying and their wives vulnerable to becoming infected and to give birth to deformed offspring.

For the people of Iraq, living in areas of high DU concentrations, the effects are beyond tragic. Iraq babies are born so deformed that many are hardly recognizable as human babies.
See http://www.wethepeoplewethemedia.com/children.htm.

The article summaries below highlight evidence that populations outside of Iraq are not safe from the effects of DU. Landis tells us, the tile of Chapter 23 in my book is "Un-Knowing Participants in the Story of Depleted Uranium" to help bring attention to this issue.

The March 2006 edition of The Lone Star Iconoclast also includes this Interview with Dr. Ernest Sternglass By W. Leon Smith"
"The issue of greatest concern is that Americans at home as well as the people in the UK and in many parts of the world are unwilling participants in this tragedy.

"... Measurements by the Weapons Establishment in England show that these fine particles travel thousands of miles around the world and, Leuren Moret has pictures that NASA satellites took showing the sand storms going across the Atlantic and all over the world so we have totally underestimated the very serious nature of the use of uranium as weapons." See Note 3 below, page 7.

Landis introduces the article segment below, pointing out its disturbing consequences for Americans

African Dust Storms Bring Depleted Uranium to the Southern U.S.
by Richard Stenger CNN, June 18, 2001
"Dust storm plumes from northern Africa travel thousands of miles across the Atlantic transporting millions of tons of sand and dust with bacteria, viruses, pollen, pollution, and radioactive isotopes such as depleted uranium from the Middle East and Central Asia.1 The easterly trade winds carry the dust across the Atlantic in 5-7 days at about 10,000 feet.2 Almost all of it is rained out into the environment within two months, including the depleted uranium and other radioactive isotopes from the Sahara. In fact these atmospheric dusts are what make sunsets red. The seasonal African storms peak in July, contributing to a reddish haze across the U.S. Southeast. From June to October the Caribbean and Central America are targeted by the storms, but the Amazon Basin gets hit from February to April."
http://archives.cnn.com/2001/TECH/science/06/18/dust.microbes/index.html

And for people in Europe, Did the use of Uranium weapons in Gulf War 2 result in contamination of Europe? Evidence from the measurements of the Atomic Weapons Establishment, Aldermaston, Berkshire, UK.
http://archives.cnn.com/2001/TECH/science/06/18/dust.microbes/index.html

The harsh and unfortunate reality we must consider is that given the global movement of dust storms like these, no one, ultimately, anywhere in the world, is safe from the effects of Depleted Uranium.
Do these issues deserve and demand our considered attention?

Chicago: In a major change of course, the AFL-CIO Convention delegates voted this afternoon in favor of a resolution calling for a "rapid" return of all U.S. troops from Iraq.
http://www.uslaboragainstwar.org

See also the "We the People - We the Media Tribune Gazette"
http://www.wethepeoplewethemedia.com/tg.htm

Un-Knowing Participants in the Story of Depleted Uranium
From Chapter Twenty-three,
"A Real 9/11 Commission Will Help Free America Now!"
ISBN: 097604-0824