Velazquez Chosen to Lead Hispanic Agenda in the 111th Congress 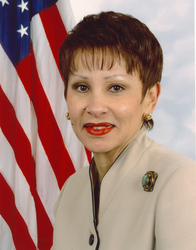 With their rapid growth, increasing purchasing power and political influence, this is both an exciting and critical time for Latinos.

Today, Congresswoman Nydia M. Velazquez (D-N.Y.) was elected by her peers in the Congressional Hispanic Caucus (CHC) to lead the group for the 111th Congress. As Chair of the CHC, the Congresswoman is committed to working in a bipartisan manner to increase opportunities for the nation's 47 million Hispanics.

"It is an honor to have been selected by my colleagues as Chair the Congressional Hispanic Caucus," Congresswoman Velazquez said. "With their rapid growth, increasing purchasing power and political influence, this is both an exciting and critical time for Latinos."

Since being elected to Congress in 1992, Congresswoman Velazquez has been an active member of the Caucus, chairing the Economic Development Task Force as well as holding the position of Vice Chair. Her leadership and advocacy stretches outside the CHC to include serving as Chair of the House Small Business Committee. In this role she has worked towards building consensus and converting ideas into legislative action. Congresswoman Velazquez plans to bring that same leadership to the CHC and advocate for a national agenda that reflects the needs and potential of Hispanic Americans.

"The current environment poses many challenges for Latinos, from the foreclosure crisis and immigration to accessing quality health care and education," Congresswoman Velazquez said. "Strengthening resources for the Hispanic community is not just good for Hispanics; it's good for the entire country. By supporting the growing number of innovative business owners in the Latino community, we will start to rebuild the economy and bolster the nation as a whole."

Since its founding in December 1976, the CHC has been dedicated to advancing issues affecting Hispanics in the United States and Puerto Rico through the legislative process. In addition to its substantial legislative role, the CHC also monitors Executive and Judicial issues. The Caucus is comprised of 21 members of Congress of Hispanic descent, and is governed under the Rules of the U.S. House of Representatives.