Natural Products Gaining In Popularity: 80 Percent Of U.S. Adults Use Them For Health Benefits 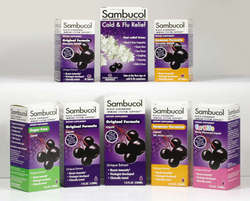 Cranberries/cranberry juice was used by one third of survey respondents and blueberries by 22%, yet elderberry, which actually has twice the natural antioxidant capacity of blueberries and almost twice that of cranberries was only used by 2%.

Eight out of 10 U.S. adults (80%) say they have used natural products for their potential health benefits in the past year, according to a new survey conducted for Sambucol® Black Elderberry immune-boosting dietary supplement. Multivitamins are the most popular (55%), followed by vitamin C (43%) and green tea (35%).

Who and what is influencing this trend?
Americans were more inclined to use a natural product if they received a recommendation from their doctor (66%) or pharmacist (55%) and if there was clinical proof of effectiveness (65%). One-in-four (40%) believes natural remedies are often just as effective as over-the-counter and/or prescription medicines, and nearly three-in-ten (29%) U.S. adults believe that natural remedies are safer than over-the-counter and/or prescription medications because they are "drug-free."

"Berry" good for your health
Berries are among the more popular natural products used for their health benefits, according to the Sambucol survey conducted by Harris Interactive. "People seem to know that berries are a good source of antioxidants," says Claire Wheeler, MD, integrative health expert and instructor at the Portland State University of Community Health, "but they don't really understand which berries deliver the most antioxidants or in what form."

The survey confirms this lack of information, Dr. Wheeler adds. "Cranberries/cranberry juice was used by one third of survey respondents and blueberries by 22%, yet elderberry, which actually has twice the natural antioxidant capacity of blueberries and almost twice that of cranberries was only used by 2%."

Sambucol® Black Elderberry dietary supplement is the original black elderberry extract developed by a virologist. It has been researched and tested in published clinical trials showing it to help support the immune system.(1)

"Sambucol's unique formulation and extraction process preserves and maximizes the naturally-occurring health benefits of the berry," says Dr. Wheeler, who has been recommending Sambucol to patients for years.

Go to http://www.sambucol.com for more information on the benefits of black elderberries.

(1) Bark, Halperin and Kalickman( 2001) The effect of Sambucol, a black elderberry- based, natural product, on the production of human cytokines. European Cytokines Network, volume 12, No. 2 pages 290- 295.

Survey Methodology
Harris Interactive® fielded the study on behalf of Sambucol® from October 8-10, 2008 via its QuickQuerySM online omnibus service, interviewing a nationwide sample of 2,212 U.S. adults aged 18 years and older. Data were weighted using propensity score weighting to be representative of the total U.S. adult population on the basis of region, age within gender, education, household income, race/ethnicity, and propensity to be online. No estimates of theoretical sampling error can be calculated; a full methodology is available.