Children's author and songwriter Barry Louis Polisar says it's true: "If you hang around the store long enough, eventually they give you something"… like Grammy nominations and lifetime achievement awards. His song "All I Want Is You" is the first track on the Juno soundtrack, an indy tribute album is in the works, and the Children's Music Web Awards saluted him as "a distinctive voice for kids' true thoughts." 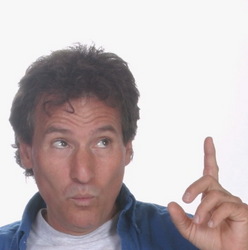 Children's author and songwriter Barry Louis Polisar says it's true: "If you hang around the store long enough, eventually they give you something"… like Grammy nominations and lifetime achievement awards.

The soundtrack to the film Juno was just nominated for a Grammy Award for "Best Compilation Soundtrack Album For a Motion Picture." Barry's song "All I Want is You" is the first song on the film soundtrack recording. The song, originally recorded in 1977, became an unexpected hit.

Barry recently won a lifetime achievement award from the Children's Music Web Awards, which are selected by kids in classrooms and day care centers worldwide. "For three decades, a distinctive voice for kids' true thoughts" is what the judges said when selecting Barry for this special award.

Even better, the "Barry Louis Polisar Tribute" album is moving forward. Aaron Cohen, a musician who fronts the band The Radioactive Chicken Heads in Los Angeles had Polisar's early recordings as a child, and plans to release this "Tribute" album of his songs in 2009.

Planned long before the release of the film JUNO, Cohen has assembled many different eclectic artists to cover Polisar's songs in new and inventive ways--from hip-hop and rap to rock, folk and jazz. There's even a Klezmer version of the Polisar song "Don't Put You Finger Up Your Nose" sung entirely in Yiddish. Polisar's son Evan does a jazzed-up saxophone duet on his father's song "I'd be Me." All the professional musicians have donated their time and talents and the album features at least two-dozen songs by artists who had Polisar's original vinyl recordings as kids. "Talk about coming full circle!" Polisar said.

Barry Louis Polisar began writing and recording songs for children in 1975 with little publicity and without the benefit of a major recording label. More than thirty years later, his songs and stories still stand out as unique and refreshing. More information is available at http://www.BarryLou.com.