Study finds 92% of Americans believe the United States economy is in a recession. 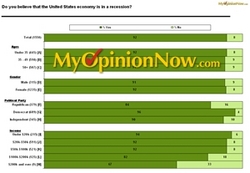 MyOpinionNow.com offers a full report on the findings of this recession

The United States is having a major crisis. As of now, 92% of Americans believe that the US is in a recession, according to a recent study based on 1,550 people across the country. The results of this study from MyOpinionNow.com have been released and paint a frightful portrait of the distressed lives of families and individuals across the nation.

This economic turmoil that we are facing is certainly interfering with everyday life on an individual basis. Of the 92% that say we're in a recession, a whopping 87% say the recession has negatively impacted the spending habits of them and their families. The majority of these Americans say that their spending habits began being impacted about six to nine months ago. The full report of this study which includes detailed findings based on demographics such as age, gender, political party, and income can be viewed by clicking here: Click to view full report on recession

Regarding the noticeable effects on everyday life, key findings from this study reveal that nearly three out of four Americans polled in this study claim to be staying in more, dining out and personal shopping less often, and relying on coupons more. Approximately 50% of Americans are also shopping for groceries less often and shopping in bulk more, while 35% are even shopping for basic necessities less. Sadly, at a time when family is so important, 46% of those polled are visiting their families less and 53% are vacationing less.

Roughly 20% believe the three worst fiscal aspects of this recession are unemployment, home foreclosures, and government bailouts of the banking/finance industry. In addition to taking a toll on personal lives, these changes are causing businesses to struggle. In fact, 56% of the Americans who are dining out less often claim to have noticed some of their favorite restaurants or stores go out of business within the past year. The restaurant industry is just one of many industries that are struggling. Regarding the numbers above it is safe to say that the travel, retail, banking/finance, and the housing industries are all struggling as well, just to name a few. However, there are some businesses that are thriving in spite of the recession. For example, since Americans are shopping in bulk more and hunting for better deals, large bulk retailers such as Wal-Mart and Costco remain recession-resilient.

About one in five people have really hit rock bottom and have declared bankruptcy (or know someone who has) within the past year and 53% believe that the worst of the recession is yet to come. On a positive note, 47% believe that President Elect Barack Obama was the candidate that would have the most positive impact on our economy (only 28% said John McCain and 25% said neither).

For more information on how to participate in studies such as this one please click here: Join MyOpinionNow.com

About MyOpinionNow.com:
MyOpinionNow.com is a licensee of TRUSTe and an accredited business of the Better Business Bureau that collects market research through online surveys. Survey-takers are compensated for their participation with merchandise and cash.