Scott Steele of Catonsville, MD caught a 95lb. white marlin on the final day of the 2009 Mid-Atlantic $500,000 Tournament, fishing aboard the vessel Toplesss 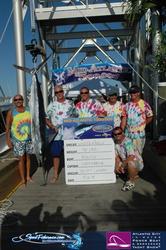 The crew of the vessel Toplesss, first place in the White Marlin category took home a $653,375.00 paycheck

The Mid-Atlantic $500,000 offshore fishing tournament wrapped up Friday with the winning white marlin being weighed on the final day of fishing. Scott Steele of Catonsville, MD caught the 95lb. white marlin, fishing aboard the vessel Toplesss, easily capturing first place, and a $653,375.00 paycheck.

The 18th annual Mid-Atlantic $500,000, is an offshore fishing tournament based at the Canyon Club Resort Marina in Cape May, New Jersey, and at the event's official satellite marina, Sunset Marina in Ocean City, Maryland. Boats entered in the tournament fish three out of five days, and target white marlin, blue marlin, tuna, dolphin (mahi-mahi), and wahoo for thousands of dollars in cash prizes. This year's total purse was $1,702,225.03. The tournament benefits the International Game Fish Association (IGFA) and the Recreational Fishing Alliance (RFA). The tournament is also a qualifying event for the World Billfish Series (WBS), and the top angler of the tournament will be invited to compete in the WBS Grand Championship in Costa Rica. Tournament directors encourage the release of billfish with high minimum weight regulations. White marlin must weigh 65lbs. and blue marlin must weigh 400lbs. to qualify. Boats are required to use non-offset circle hooks when using natural baits or natural bait and lure combinations. Research has shown that the use of non-offset circle hooks drastically reduces the mortality rate of released fish. This year's tournament had a 91.8% release rate for billfish.

This year's event kicked off with great weather and even better fishing. Of the 136 boats entered in the tournament, 127 fished on the first day. The leaderboard quickly filled up with white marlin weighing 75, 74, and 71 pounds. Sonny Falcone of Staten Island, New York, took command of the blue marlin category with a 453lb. fish. It was a lead he, and the crew of the Cookie II, would never relinquish. Charlie Duerr of Tinton Falls, New Jersey fishing aboard the Sea Hag, claimed a share the top spot in the tuna category with a 67lb. yellowfin tuna. The crew aboard the Predator also weighed a 69lb. yellowfin tuna.

Tuesday and Wednesday saw 123 and 62 boats fishing, respectively, as worries grew about Hurricane Bill's approach later in the week, and the sea conditions it would bring with it. 95 boats fished Thursday, and a tournament record 97lb. wahoo hit the scales. Bill Gallo of Warren, New Jersey caught the fish on the boat Joanna. The winning dolphin was also weighed Thursday, as Mike Ackley of Mannington, New Jersey caught the 37lb. fish aboard the boat Foray. However, nothing could top the excitement generated when the crew of the Toplesss, out of Ocean City, Maryland, pulled up to the scales at Sunset Marina with the winning white marlin on the final day of the tournament.

This year the Mid-Atlantic $500,000 teamed up with SportFishermen.com to bring live webcam coverage of the weigh-ins at both the Canyon Club Resort Marina and Sunset Marina, plus up to the minute updates and photos published on SportFishermen.com

SportFishermen.com is the internet's largest website dedicated to saltwater sport fishing around the World. Complete coverage of the tournament can been seen at http://www.midatlantic500000.com and http://www.sportfishermen.com.