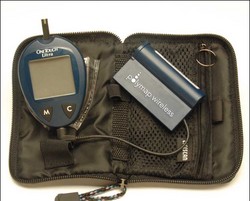 By embedding Bluetooth technology into your product you gain access to an expanded market, one that I would argue is a very important market because of the exploding geriatric population and the increasing number of people with chronic diseases

Facilitating the entry of Bluetooth into the medical device industry is the modern protocol analyzer, now updated to effortlessly examine not only the wireless interface between devices, such as a glucose monitor and a telephone modem, but also the interface between the device CPU and the Bluetooth chip inside the device. The advanced capabilities of today's protocol analyzer software help to overcome the fear associated with "cutting the umbilical cord" to traditionally hard-wired elements.

"By embedding Bluetooth technology into your product you gain access to an expanded market, one that I would argue is a very important market because of the exploding geriatric population and the increasing number of people with chronic diseases," says Pierre Landau, Ph.D., president of Tucson, Arizona-based Polymap Wireless.

There is no denying that Bluetooth reins as the technology of choice for connecting wireless devices. The need for wireless data recording and transmission reaches an almost "acute" level within the medical device industry. Until now, hesitation to jump on the bandwagon has usually stemmed from the well-founded concern that the is a complex technology with numerous protocols, profiles (use cases), and the automatic challenges that come from any wireless technology, but especially one where the connection and disconnection of devices is almost always ad hoc. So, too, is it an ever-evolving standard, with not only a rapidly growing number of profiles, but also constant

During the sending and receiving of information, any number of quality issues can arise including dropped connections, data corruption or loss, interference, slow throughput, and signal degradation, all of which can ultimately affect the end user's experience with the product in a negative manner.

Up until recently, Bluetooth protocol analyzers could only operate by way of an "air sniffer" for the wireless link between devices, or by way of a "HCI sniffer" (Host Controller Interface) the wired connection between the CPU and the chip inside the device. While examining each link individually provides valuable information, it does not go far enough. Frontline's fully-featured protocol analyzers can air sniff and HCI sniff both sides of the chip simultaneously, greatly enhancing the debugging and verification process, providing what is known as "virtual sniffing" where the analyzer does not physically tap the link. Virtual sniffing is an alternative to traditional HCI sniffing.

The wireless revolution will continue, as both medical providers and patients recognize the value proposition of working without cables. Device manufacturers who wish to capitalize on this trend can help ensure success with the use of today's modern protocol analyzers.

The Bluetooth word mark and logos are owned by the Bluetooth SIG, Inc. FTS4BT is a trademark of Frontline Test Equipment, Inc.