Architectural model to include building and facilities 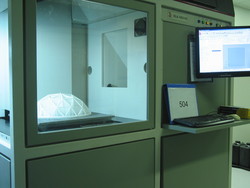 The delivery of this architectural model will mark another milestone in this scientific quest, and facilitate our communication with the scientific community and the public on the scope and magnitude that this project represents.

Axis Prototypes is pleased to be working with the Association of Canadian Universities for Research in Astronomy (ACURA) for the realization of a 1:144 scale model of the Thirty Meter Telescope (TMT) project. This model is one of Canada's contributions to TMT, an international partnership involving ACURA, The California Institute of Technology (Caltech) and the University of California and with participation from the National Astronomical Observatory of Japan.

Axis was mandated by the TMT Project team to realize a professional scale model of the building and facilities. Each component of the 30 meter telescope building and facility will be fabricated with laser precision on the company's prototyping systems (SLA and SLS). Using materials that best meet the required mechanical properties, Axis will address key considerations which include high strength areas, transparent structures, and overall weight reduction. To ensure the integrity of the parts, reduce weight and control costs, Axis used specialized software to hollow the parts reinforced by an internal honeycomb structure designed to stiffen the outer shells while allowing up to 70% reduction in weight and resin consumption.

As a pioneer in rapid prototyping with well over 10 year's experience, Axis Prototypes excels in the area of architectural models. Whether they be for wind tunnel testing, visual assessment by the architectural & engineering team, or professionally finished for display, Axis's end-to-end project management allow it to effectively realize all aspects of the model fabrication, finishing, and integration. The finishing team, under the leadership of an award winning model maker, is excited at this opportunity to deliver a model of the enclosure that will be representative of the commitment and vision of the TMT partnership.

"The TMT Project will enable scientists to make observations like no other telescope before it," stated Dr. Raymond Carlberg, Project Director in Canada. He added, "The delivery of this architectural model will mark another milestone in this scientific quest, and facilitate our communication with the scientific community and the public on the scope and magnitude that this project represents."

"The growing adoption of 3D modeling software in architecture will change the way architectural models are realized," stated Gilles Desharnais, President of Axis Prototypes. He adds, "Axis is investing in the tools, methods and libraries to tap this market and evolve the fabrication of high quality scale models for architectural projects. Rapid Prototyping technologies enable a model of this magnitude to be fabricated, finished, and delivered in record time. TMT represents a special venue to showcase our capabilities, and we are pleased to have been chosen to realize this unique project."

The fabrication phase of the model is completed. The model is now entering into the finishing phase, on time for the unveiling of the model to be scheduled later on this month.

About Axis Prototypes:
Axis Prototypes Inc. is a Canadian based rapid prototyping service bureau offering fabrication of 3D prototypes in SLA, SLS, Objet, FDM and 3D Printing. Based in Montreal, Axis is Canada's premier service bureau with the largest installation entirely dedicated to rapid prototyping and custom additive manufacturing, for a variety of applications including the fabrication of Architectural Models.

About ACURA:
The Association of Canadian Universities for Research in Astronomy (ACURA) is a partner in the TMT project, comprised of a group of Canadian universities dedicated to the advancement of teaching and research in astronomy and astrophysics. It has many roles, acting as a liaison between Canadians and international partners in world observatories and being an advocate for the priorities in the Long Range Plan for Astronomy. The Canadian TMT contribution is funded in part by the National Research Council - Herzberg Institute of Astrophysics (NRC-HIA), the Canadian Foundation for Innovation (CFI), the Natural Sciences and Engineering Research Council of Canada (NSERC), the Ontario Ministry of Research and Innovation Fund (ORF), and the British Columbia Knowledge Development Fund.