The question of how raw chemicals became biologically driven to evolve into life may now have an answer in material science. 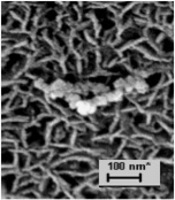 a completely new material that may have significance in the carbon-carbon composite field and other applications.

JenLaur Ltd., LLC is announcing the discovery of a template for creation of amino acids, nucleosides, and RNA through a proprietary patent pending method of metallofullerene production. This new process is a further development of prior metallofullerene methodology that was, in the words of Dr. Richard E. Smalley, "a completely new material that may have significance in the carbon-carbon composite field and other applications."

Recent advances allow for the commercial production of these elegant self-replicating concentrated homochiral metallofullerene double alpha helices incorporating Cn 60 (buckyballs), with endohedrally and exohedrally bound Fe2+ and Fe3+ as well as Si CHONPS chemistry as feedstock, when combined with sterile water for a proto-biotic system. Within minutes of bringing the mixture to 95 C, positive-strand microRNA develop on the homochiral templates (see attached MALDI MS and MS/MS and HRSEM).

This may well prove to be the "billion dollar molecule" J. Craig Venter alluded to in his synthetic life releases, for it appears that this is the first time artificial life -- utilizing a description of "life" defined by researchers collaborating with NASA -- has been created from purely abiotic origins. This discovery may assist mankind in its continuing struggle to understand the universe and successfully live within its domain.

The material, itself a nanomat of high aspect ratio metallofullerene nanocables, acts as a chemical template on which exist several billion structural options, whereby nature could select the proper rotameric states for the chemistry of life. Given the material's rotameric structure and high number of selectable sites, the process has been observed to foster evolutionary development of RNA into ribozymes and ribosomes, to polysomes and full colonies of slime mold that contain DNA as well as RNA; all independently confirmed within days and months of the initially observed microscopic growth.

As fullerenes are known to exist in meteorites or, based on prior patented material by Job, through a liquid/solid-created periatectic phase, these structures could have been part of a late Hadean or late heavy bombardment (LHB) and thus would lend credibility to the notion of geophysical evolution.

Accepting that data, it is fully conceivable that these thermophiles, in the early stages of our Earth's history, would have grown successfully into a large biomass within relatively short time spans, giving rise to an enormous feedstock from which viral, bacterial, and multi-cellular life forms would undergo further evolution and flourish.

The attached HRSEM images, scanned at UNC Medical Center and confirmed by MALDI MS and MS/MS by Dr. Viroel Mocanu of UNC/Duke, are of a sample from the first series of trials and illustrate the initial development of RNA. The trials were prepared using a nanomat of abiotic homochiral templates of Fe2+, Fe3+, Si, C, H, O, N, S, and P that was sterilized at 1250 F under an inert Ar N CO2 atmosphere. These nanomats of homochiral double alpha helices (see attached models with STM confirmation) were then introduced to triple sterile water at 95 C for 24 hours, resulting in the formation of RNA, ribosomal, polysomal, and finally, fully encapsulated cell structures. In subsequent trials following the same protocol, life activity was clearly visible under 100X light microscopy after only 4 hours (see attached video).

Intrinsic to the continued success of the trials is the focused effort to assure safety and guard against cross contamination. An independent university laboratory was retained to perform a culture of the 24-hour growth. During this round of trials, samples of the initial growth were taken from the inert gas sealed vessels and cultured in blood agar, MacConkey agar, and Renek Sab. Dex. dishes under industry standards. After two weeks, with normal exams taken at 7 and 10 days, absolutely no growth was observed, ruling out any typical environmental contamination. These sealed under normal atmosphere original Petri dishes were then heated to 85-95C for 48 hours and subsequently cooled to room temperature. Growths demonstrably different from one another were observed to form within all three dishes over a period of several weeks. These cultures have continued to grow without addition to the original culture medium for approximately a year at room temperature.

Robert Job, chief metallurgist at JenLaur Ltd., LLC of Cary, NC, created this artificial life through repeated trials over the last two years that have been confirmed by research carried out at UNC Chapel Hill. The metallofullerene structures are presently under examination at the Materials Research Lab at Wright Paterson AFB, only the beginning of a world-wide effort to confirm and utilize these breakthrough materials.

JenLaur Ltd., LLC is interested in building multi-disciplinary partnerships with institutions and businesses that have established places in the forefront of evolutionary biology, pharmacology, biophysics, material science, origin of life studies. The JenLaur Ltd. team is moving forward with these patent-pending materials and processes in a way that should provide an analysis and de novo understanding of biological binding and synthesis systems. They expect to apply this technology to the development of new pharmaceuticals at the micro RNA level. In addition to the work in the biophysical arena, their team is confident that they have created the first commercially viable bulk material for solution-processed tandem photovoltaic cells based on highly efficient &#960;-conjugated biolplymer-based bulk heterojunctions that virtually eliminates interface recombination. There also appears to be numerous applications in highly efficient lithium-ion/iron battery systems as well as read/write bulk memory nanomaterials.

These de novo life forms have proven to be extremely robust and able to mutate freely in order to survive and evolve in environments that transition from anaerobic to aerobic, photon free to photosynthetic, thermophylic to ambient temperatures, and sterile water to saline solutions, as well as large ranges of pH and acidity differentials.

The abiotic parent structures have survived open atmospheric exposure at up to 3400 F, severe acidic attacks, and highly modified atmospheric conditions at room temperature. This level of stability, along with the extremely high levels of conductivity, should bode well for finally realizing the dream of a paintable photovoltaic system that is commercially viable and fully competitive with current energy costs.

One of their most recent discoveries has been the creation of a new bacterium that can metabolize propane from a simple seawater solution, which has obvious implications for reducing carbon footprints.

JenLaur Ltd., LLC is happy to provide certified samples of materials to labs for independent analysis so that these patent-pending structures and processes may be independently confirmed and utilized. Its team is also willing to openly demonstrate, within the constraints of security and safety, the evolution of life process from the initial sterilization at 1250 F to the microscopic examination of the living matter, which averages approximately four hours depending on the system utilized.

HRSEM and MS/MS of Abiotic Based Life

Comparison of Template to RNA