Seven Falls is a new album that celebrates the love in Marshall Styler's life; the album launched June 16th. The release party included a live piano performance by Styler on the patio overlooking scenic Lake Travis at The Crossings resort and spa in Austin, TX. Marshall Styler is considered one of the premiere New Age musicians specializing in instrumental keyboard music featuring melodic piano. 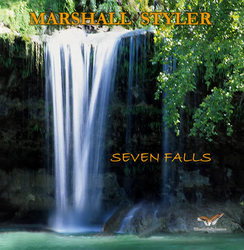 The images I had when I composed Seven Falls were romantic

What can be more romantic than cuddling on a candlelit patio overlooking Lake Travis? Doing so as composer Marshall Styler plays romantic piano music in the background, of course. Styler launched his seventh album, Seven Falls, with a complimentary live performance at The Crossings resort/spa in Austin, TX. (http://www.thecrossingsaustin.com)

Seven Falls arrived in stores on June 16th via Burnside Distributing Corp., presenting a whole new range of the deeply-moving piano melodies for which Styler is celebrated. Expertly composed, arranged and performed by Styler, Seven Falls is lovingly inspired by the special people and places in his life.

"The images I had when I composed Seven Falls were romantic," notes the Austin-based composer. "Seven Falls is symbolic of where my wife is from in upstate N.Y., where--early in our relationship--we already knew that we would spend our lives together."

With this album, Styler, an ex-rocker, offers a refreshing blend of his unique instrumental piano music and keyboard accompaniments, subtly accentuating them with orchestral sounds. It is perfect for relaxed entertaining, meditation and massage, hence the launch at The Crossings. Nine pieces lead us through the soundscapes of Styler's life from the plaintive "Welcome Back to Dreamland, Austin 4 a.m." evoking the distant yet reassuring cry of the South Austin Train, to the nostalgic "Mandala (Mary's Waltz)," described as "a waltz that keeps going 'round and 'round like one of my mothers mandalas," a sample of which can be seen in the CD liner notes. The compassionate tone of "One Day in One Heart" seems to acknowledge that everybody hurts, offering quiet reassurance that it really is going to be all right. "Seven Falls" commemorates the start of his 20-year romance with his cherished wife, Kate, and "Adirondack" recalls memories of Styler's last extended family reunion in upstate New York, amidst a warm summer rainstorm.

Such personal inspirations will not surprise Styler's fans; it is exactly what they love about him and his music. Like a glimpse into his life, the music of Marshall Styler is unapologetically passionate and heartfelt. The melodies are rendered first by hand "on a little piano in the house as they come to me," and eventually evolve into left- and right-handed parts. At that point, Styler heads for the sanctuary of his studio, where they are recorded and brought to life on a combination of Styler's seven synthesizers of various brands and ages.

Music from Styler's previous six new age albums has been feted in magazines (Massage, American Salon, New Age Reporter) and indie music webzines like Smother.net, which referred to Styler's most recent album, A Face in the Clouds, as "hauntingly-lovely" and "a fine new age album in the classic piano-with-synth-backing style." Similarly, the Italian New Age magazine said it was "among the most beautifully orchestrated pieces Styler has ever conceived and recorded," while veteran New Age reviewer Bill Binkelman professed, "It reminds me of how good electronic keyboard music can still be when it's written and performed by someone who knows what he's doing."

Styler had just released A Face in the Clouds in 2007 when the muse called again, with songs for Seven Falls. "I was looking forward to taking a break, but all of a sudden I heard these melodies in my head, and I'm not one to question it. I played them on the little piano, in the house, and then moved into the studio with a few songs to develop. This album took a little over two years, and as you'll see in the liner notes, it's dedicated to all the fantastic mothers in my life."

Styler looks forward to sharing Seven Falls with his fans, both in Texas and around the world. He gives the following insight: "Listening to it now, It sounds like a culmination of what I've been striving for in my music - for the listener to feel what I felt writing it, and for the music not to overwhelm the emotion. Based on what I hear from my listeners, that emotional element runs quietly and deeply throughout my music."

About the Artist: Marshall Styler is a composer and recording artist based in Austin, TX. He is considered one of the premiere New Age musicians specializing in instrumental keyboard music featuring melodic piano. Perhaps best-known for his Red River Trilogy of albums inspired by places around Texas, that collection introduced Styler's uniquely melodic music to thousands of fans around the world, and paved the way for albums like Jericho, The Twilight Concertos, A Face in the Clouds, and his latest work, Seven Falls. A visual music DVD and a Christmas album, Silent Night, round out the mix.