Featured Webcomic Aspires to Be a Classic Comic Strip, As it Turns 100

Fans-See This! is a webcomic becoming more and more popular by the moment. Recently, Fans-See This! issued it's 100th comic strip and received a featured article. Now creators Mark Bloom and Mark Wilson are aiming to make their comic a classic. 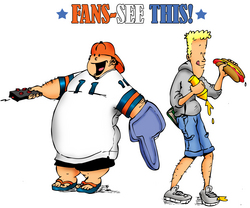 Barney and Franklin of Fans-See This!

With newspapers getting smaller and smaller we want people to have a place to go where they can still find classic funnies.

Fans-See This!, http://www.FansSeeThis.com a daily webcomic from writer Mark Bloom and illustrator Mark Wilson, issued their 100th installment on June 16, but these two have higher goals than a simple webcomic that pervades the internet.

"Both of us grew up loving classic comic strips like Peanuts and Calvin and Hobbes, and we strive to live up to those type of comics," says Bloom. "With newspapers getting smaller and smaller we want people to have a place to go where they can still find classic funnies."

Fans-See This! follows the lives of its two main characters, Barney and Franklin. Barney is the ultimate sports fan, who lives for the next sporting event. He's heavily invested in every play of every game, and is quite the opposite of his best friend, Franklin, who can just as easily be found at a spoken word contest as he can a baseball game.

While Fans-See This! revolves around a sports fan's world, Bloom is quick to point out that you don't need to be a sports fan to understand the humor; "Yes, there are occasional references to sports that only a true sports fan will understand, but our punch line has referenced Charles Dickens more often than it has Kobe Bryant."

One of the more popular comics is a parody of the famous "Evolution of Man" picture, with the strip entitled "The Evolution of Fan" http://fansseethis.com/archives.php?id=56&prm=5

The Fans-See This! website includes a complete archive of all the strips, character descriptions, as well as contact and subscription information.

Bloom says that readership has increased since they were featured in a recent Burbank newspaper http://www.burbankleader.com/articles/2009/06/10/entertainment/blr-comic10.txt "The article helped a lot. We feel like we have a very good product, but for the most part it has been slow going trying to find an audience, because no one knows we're out there. Once people do, and they read a couple of weeks worth of strips, I think they will be hooked."

Either way, Bloom and Wilson are ready to create and distribute the next 100 episodes of Fans-See This!