One of the world's wealthiest Saudi Arabian businessmen recently placed a custom order for what is now considered the world's most expensive male enhancement device. Made of solid 18kt gold, this adult novelty product is reminiscent of the goods made for dictators, tyrants, and the oil rich of the world. 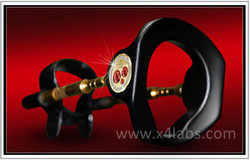 Our customers are always granted the utmost privacy, however; we are extremely pleased to have been selected to develop this device.

X4 Labs, a Canadian medical device manufacturer, was selected as the developer of this somewhat unorthodox request and will work alongside Montreal custom jewellers to put together the "Rolex" of male novelty devices . Typically, a medical traction device retails for between $200 to $400, however; this custom male enhancement device will reach over a $35,000 price tag. The order includes a bezel set with over 40 full cut diamonds, several rubies and a completely solid gold structure.

Company representatives have indicated that the identity of the Saudi Arabian national would not be revealed. Frank Clementine stated - "Our customers are always granted the utmost privacy, however; we are extremely pleased to have been selected to develop this device." It is uncertain as to whether this will become a trend, however; X4 Labs does intend on continuing to provide qualified patients and/or customers with the ability to custom design their male novelty devices.

Product coordinator Matt West is convinced that there is a demographic that is willing to pay for lavish medical devices for their private areas. "Whether it be dictators, politicians, oil rich middle easterners, or successful businessmen, they are willing to pay good money to spoil themselves." There is something tremendously selfish about the male ego, and subsequently orders for $35000 may become the norm for companies like X4 Labs.

Defying the ongoing economic crisis, $35,000 shows that some are still able to afford the lavish purchases of the rich and famous. This male health accessory is the most expensive traction device ever produced and will likely become a historical bench mark for the adult novelty industry.
While Saudi Arabian laws prevent the import of adult novelty products, the X4 Labs device is actually a medical device that is FDA Registered as well as CE Certified. The X4 Labs device has also been adopted by doctors in the United States, Canada, and Europe. This delivery will also be made using an insured armoured transport to ensure the safe and secure arrival of the rather expensive male enhancement device. Further inquiries on the custom made device can be made by contacting X4 Labs Inc. via telephone at 1-866-970-9595 or visiting their official website at http://www.X4Labs.com