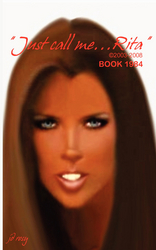 JUST CALL ME...RITA: BOOK 1984
(http://www.ritasdiary.com) is a colorful, outrageous, fictional diary of a vain, angry 21-year-old girl who lives for drugs, sex and vengeance--against her cheating first husband or against anyone who she believes has crossed her.

"I decided to publish Rita's diary to honestly let people know what a demented 21-year-old bad girl might go through in the 1984 Los Angeles rock scene," author J.D. Rosy explains. "Rita was living by the seven deadly sins and taking them to a new dimension. Her life that year was a volatile cocktail of absolute decadence, as she lived in a fast lane, but in serious poverty. Rita is survival-driven girl who did way too many drugs, drank way too much booze, laid considerably too many guys (and girls) and was lucky to have come out of it intact. She did things some girls of the '80s would never admit to, but she has decided to honestly expose her behavior in detail."

One reader of JUST CALL ME...RITA (http://www.ritasdiary.com), writing at Barnes and Noble's website, declares, "I could not stop laughing. Rita is one crazy broad, and the characters in the book are off-the-wall and kooky, yet it is an honest depiction of a 21-year-old's life of excess in the '80s."

Another reader states, "Rita is absolutely insane. The things she says and does are totally unbelievable. The book is written in a slang form, which gives it an authentic appeal. All the characters are funny, and most people can relate to the situations, since they are heavily based on reality. If you want a good laugh, you have to read this."

J.D.Rosy recounts the plot, "Sam, Rita's first ex, had wild aspirations of becoming a famous rock star, so they moved to L.A. But his dreams quickly fizzled, and they shacked up in squalor with his band buds in a roach- and rat-infested flat. After Rita caught Sam cheating on her, she filed for divorce and went into despair and decline, getting busted for theft and sometimes living in a stolen car in the middle of gunfire and gang wars. Coke and whiskey helped ease her pain, along with her friends, who admittedly were mostly druggies, dealers, mobsters, bikers and transvestites.

"You know, it seems that it's okay for guys to rant and confess to bad behavior, but when it's a female, the old double standard crops up. These kinds of things happened to real people. Perhaps Rita was rather daring, and some might even consider her 'loose,' but she played the hand she was dealt."

About Author J.D. Rosy
J.D. Rosy was born in Toronto and raised in its suburbs. She attended business school, studied computers and then did office work for 25 years. This book grew out of a ninth-grade English assignment in which the students were asked to keep a daily journal. Rosy continued writing the journals, which, over time, evolved into Rita's eight years' worth of diaries. She replaced proper grammar with slang, but used actual dates and places. In 2003, Rosy started a website (ritasdiary.com) which offers the e-book version of the annual diaries, running from 1981 to 1988. The 1984 diary came out in book form in 2009, and the 1983 book is due out later this year. Rosy is married to a Toronto businessman and can't remember having any kids.