Working Class Entrepreneur Inspires Others To Turn Hundreds Into Millions

As a working class single father, Wayne Perry decided to chase his entrepreneurial dreams when he created the world's first hot pepper nasal spray to relieve headaches, sinus and allergy problems. Perry launched Sinus Buster nasal spray in 2003 with $350, and today the brand has grown into a multi-million-dollar success. Perry's inspirational story was recently featured in Donny Deustch's new book, "The Big Idea", based on the popular CNBC television show. Now Perry is teaching other aspiring entrepreneurs how to make it big on a working class budget with his own new book. 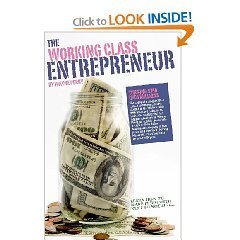 As a working class single father, Wayne Perry decided to chase his entrepreneurial dreams when he created the world's first hot pepper nasal spray to relieve headaches, sinus and allergy problems. Perry launched Sinus Buster nasal spray in 2003 with $350, and today the brand has grown into a multi-million-dollar success. Perry started in his kitchen while most people laughed at his venture, but today Sinus Buster is sold in thousands of retailers including giants like Walgreens, Rite Aid and Vitamin World. Perry's inspirational story was recently featured in Donny Deustch's new book, "The Big Idea", based on the popular CNBC television show. Now Perry is teaching other aspiring entrepreneurs how to make it big on a working class budget with his own new book, "The Working Class Entrepreneur".

"Sinus Buster started selling right away on the web, but the first big break came when I was given a chance to speak with Howard Stern on his radio show. I plugged the product once, and we sold almost thirty thousand dollars worth in just a couple days. Howard Stern got me out of my kitchen and into a commercial workspace, and I was able to hire a couple employees. I will always love the King of Media for what he did, whether he knows it or not. He really helped us take the business to the next level", says Perry.

Wayne got his chance on the Stern show because he had been fired from his television commentary job by Clear Channel Communications, the same company that dropped Stern from hundreds of stations in their huge radio division. Just as Stern did, Perry felt Clear Channel was unfairly suppressing the media, and so the connection was made. After being fired, Perry went on to create Sinus Buster in a last ditch effort to pick up the pieces of his life, hoping to find a new way to support his family.

Nearly a decade earlier, Wayne discovered hot peppers could relieve headaches as a self-defense instructor teaching personal safety workshops. Perry was a regular guest on popular talk shows in the 1990s including Montel Williams, Maury Povich and Oprah Winfrey. After teaching Oprah to use self-defense pepper spray on her show, he was barraged with offers to demonstrate the use of pepper spray across the country. To sell his videos and promote his workshops, Perry performed live pepper spray demonstrations to garner media attention. As a chronic headache sufferer, Wayne never had a headache attack during his performances until 1995, while doing a demonstration for a FOX News affiliate in Albany, New York.

"Only a few minutes before I was suppose to get sprayed with pepper spray, I got the worst cluster headache ever. The show had to go on. So I let the reporter spray me like I had done so many times before. When the spray hit my face, I immediately succumbed to the familiar burning and choking. Then I realized I never felt better in my life. My headache was gone in seconds and that's when I knew I found something big", says Perry.

Wayne wasn't thinking about selling his new discovery at the time, but he developed a pepper nasal spray that consistently relieved his own headaches and sinus congestion. Once he lost his television gig, Perry worked multiple dead-end jobs to keep his family going until he got the idea to sell his nasal spray. He used the internet to find suppliers for bottles, tops and ingredients. Then he produced the first few batches in his kitchen with only a few hundred dollars. He started selling Sinus Buster on eBay and it became an instant hit with buyers. After plugging his product on the Howard Stern show, Perry's nasal spray quickly turned into a thriving business that went on to be featured in The Wall Street Journal and on The Big Idea.

In just five years, this working class entrepreneur turned hundreds of dollars into millions by following his entrepreneurial dreams. Perry's climb to success was drenched with bad luck and tough times, but he learned to overcome the obstacles that keep most entrepreneurs from making it big. After Perry sold his company, he decided to write a book teaching other aspiring entrepreneurs how to make something big from nothing.

"During the building of Sinus Buster, I learned so much about growing a business from the ground up, and I wished I'd been taught these things before I started. I've read lots of business books, but none of them taught real lessons I could use as a working class guy with no cash. So I figured there's lots of frustrated entrepreneurs out there who feel the same way I did. It's easy to get something moving when you have lots of cash, but most aspiring entrepreneurs barely have two nickels to rub together. This book is designed to give them a leg up on the well financed businesses", says Perry.

Perry's new book, "The Working Class Entrepreneur" goes far beyond traditional business guides to give readers an inside look at what it takes to turn any big idea into a million-dollar success. In this economy, the concept is certainly a good one since everyone is looking for new ways to generate extra cash. Not only does Perry's book share his personal successes and failures, but it also shares little known tricks for creating a successful brand in a challenging economy. Whether you're looking for personal inspiration or real world knowledge, Perry's book is sure to become an important guide for entrepreneurs who are forced to support their dreams on a working class budget.

The Working Class Entrepreneur is available at Amazon and can also be ordered through book stores nationwide. There's also a Kindle edition, and soon the publisher will be offering a free iPhone application, giving readers a chance to preview highlights. Perry's book also features an entrepreneur's resource guide and a very funny "Corporate Constipation" dictionary. The Working Class Entrepreneur grabs readers from the very first chapter with a combination of soulful insight, real world knowledge and mind bending lessons from main street. In addition to helping grow a business, the book also teaches readers how to deal with success once they achieve it.