Sarasota Memorial Hospital is collaborating with start-up tech firm, Voalté, to introduce an innovative iPhone application. The application allows for voice, alarm and text messages to be delivered to the point of care via the iPhone. The application is being welcomed by Nurses who are finding they have more time to spend caring for patients. 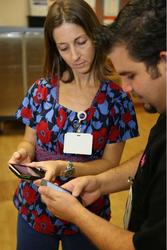 While the Voalté product was still in development, Lauderdale began looking for a suitable health care facility to help shape the application. He knew that Sarasota Memorial, long recognized as one of the nation's top hospitals, had a reputation for embracing leading-edge technology. He approached Denis Baker, the hospital's Chief Information Officer, with his new technology. After several meetings, a deal was struck to pilot the Voalté One™ solution in the hospital.

"We are committed to providing our patients with the very best health care," said Baker. "We harness technology to improve care and increase efficiency. The Voalté application had components we felt would assist in providing a better experience for our patients."

The Voalté One application is designed to give nurses much more time to do what they were hired to do, patient care. Studies have shown that nurses often spend up to 75 percent of their shift dealing with, finding, or coordinating information - time that would be better spent taking care of patients.

In June 2009, the Voalté One solution went "live" at SMH. The hospital staff worked closely with the Voalté team to gauge the success of the application, including how easily the nurses adapted to carrying and using iPhones. A special feature of the application enabled nurses to provide direct feedback to Voalté. This helped Voalté fine tune the product for the needs of the individual departments and users.

Sarasota Memorial understands the importance of nurse satisfaction. The hospital has earned the prestigious Magnet Nursing Services Recognition from the American Nurses Credentialing Center (ANCC). Awarded by the foremost authority in nursing, this national designation is the highest level of recognition that can be given to nursing organizations in health care. Less than 5 percent of hospitals in the United States have earned the recognition.

So, how do Sarasota Memorial nurses feel about the Voalté application?

"The nurses have embraced the technology and have given us great feedback," said P.J. Floyd, Associate Chief Nursing Officer at Sarasota Memorial Hospital. "The Voalté One makes them better able to respond quickly to patient's needs."

The hospital rooms and halls are a lot quieter, too, thanks to the Voalté application, which significantly reduces overhead paging. The results of a private study after the implementation of the application indicated a 78 percent reduction in overhead paging.

Even patients have noticed the reduction of overhead paging, said Floyd. "One patient asked, 'Is everything ok?' because it was so quiet."

For Lauderdale, it was validation of his idea.

"I was excited about the possibilities that an innovative communication platform like the iPhone could deliver to hospitals and I was confident it could help nurses provide better patient care," said Lauderdale. "This application is an opportunity for us to truly make a difference."

The Voalté One application has been deemed a success and is now being expanded to other units of Sarasota Memorial. Two other major hospitals in the U.S. have signed on to implement the Voalté One on the iPhone.

About SARASOTA MEMORIAL HOSPITAL
Sarasota Memorial Health Care System is a regional referral center offering Southwest Florida's greatest breadth and depth of inpatient, outpatient and extended care. Its 806-bed hospital is Florida's second largest acute care public hospital. It is the only hospital in the Southwest Florida region that has ranked repeatedly among U.S. News & World Report's America's 50 Best Hospitals, that has been recognized among "America's Safest Hospitals" by Forbes.com, and that has been awarded Magnet Nursing Services Recognition- the nation's highest honor for excellence in nursing.